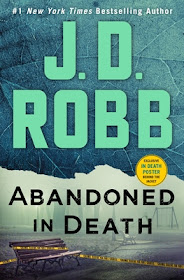 J.D. Robb's 54th installment  Abandoned in Death in the In Death series released on February 8th arrived and as always, everything stopped while I read it. Once again, Robb knocks it out the ballpark.  I had no idea who the killer was throughout, going from man to woman to back again, as the clues piled up, some leading no where, until Eve managed to put it all together.

The woman’s body was found on a bench in a New York City playground. She was clean, her hair neatly arranged, her makeup carefully applied. But other things were very wrong—like the tattoo and piercings, clearly new. The clothes, decades out of date. The fatal wound hidden beneath a ribbon around her neck. And the note: Bad Mommy, written in crayon as if by a child.

It seems clear the killer’s childhood was traumatic—a situation Eve is all too familiar with herself. Yet the clues point to a perpetrator who’d be around sixty, and there are no records of old crimes with a similar MO. What was the trigger that apparently reopened such an old wound and sent someone over the edge? When Eve learns that other young women have recently vanished, the case grows even more urgent—and to solve it she’ll need to find her way into a hidden place of dim light and concrete, into the distant past, and into the depths of a shattered mind."

The story dipped slightly into Eve's past, but just a little, so as not to derail the story. There were likenesses, but she didn't let it bother her. She's grown past the torment to acceptance, so could concentrate on the murderer as the clock ticks down to another murder.  The surprising reveal of the bad guy upset everyone as he was well known to them all.

The whole cast of characters were along for the ride on this one which was nice.  Well worth reading again.