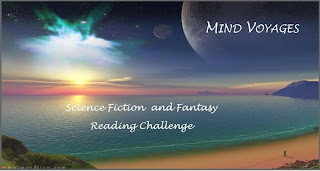 Science fiction and fantasy books have always been my one true love ever since I read my first sci fi book back in the 70's.  I don't remember whether it was Edgar Rice Burroughs, Arthur Clark, Ray Bradbury, Larry Niven, Piers Anthony, Anne McCaffrey or Robert Silverberg who captured me first.

In 2010 when I stumbled upon the Hugo Award  web site, the list of winners made my mouth water and tickled my imagination.   All the books on the list looked so good that I decided to read through the list, starting with the oldest.  All the nominated authors looked too good to pass up and I decided to take side trips and read the nominees.   Other ideas popped into my mind which is what the sci-fi and fantasy genre does to you - expands your mind and gives you ideas.

What do you think of when you hear about the Science Fiction and Fantasy genre?   I think of books with adventure, exploration, mind altering worlds, knights, dragons, cool space ships, alternate realities, magical quests, new technology,  evil villains and heroes.  Books that entertain and enlighten, books that take you away, books that take you on a voyage - a mind voyage.

So I decided to take a Mind Voyage and explore the hugo and nebula winners, take side trips through the different decades reading the nominees and  check out Philip K. Dick and Robert Heinlein.    Plus, since I like a wide variety of books and like to explore, can't possibly imagine a reading challenge without exploring new releases as well.

Sling shot back to Earth : Read at least 3 winners on the Nebula Winner's List

Mars Voyage : Read at least 6 winners on the Hugo List and take a side trip through the 21st century and read at least 4 nominees.

Go into Warp Drive and visit the other planets

The I'm going to Pluto because Pluto is still a planet as far as I'm concerned Voyage.