First Sentence:  As the man dressed head to to in khaki turned the corner and began racewalking uphill in my direction, I had to wonder:  had we met before?


In Mark Adams Turn Right at Machu Picchu, he takes us into the past while in the present traversing the trails, taking us along for the ride as he explores Peru's history, follows in the footsteps of Hiram Bingham who 'discovered' Machu Picchu and the mysteries of the Inca trail.  He takes what could have been a boring historical travelogue and fills it with humor and insights into the past. We get to experience all his trials and tribulations along the trail as well as met interesting people from the past and in the present.

First sentence:  "The first time that Christa Malone heard the name of Innokenti Isayevich Falin, it was spoken by the president of the United State's John F. Kennedy."

John Crowley's The Translator is another dusty historical fiction book that's been waiting for the right moment.  A young college girl becomes enamored with her professor, an exiled Russian, during the 60's.  His Russian poetry is politically symbolic,  but when translated into English, doesn't have exactly the same meaning. Combine the Cuban missile crisis, political intrigue, students needing to fit in and campus protests with the quest to understand literature and poetry and it makes for an interesting read. 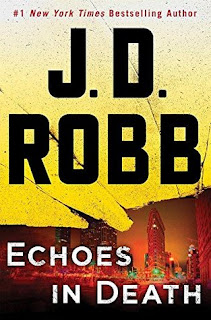 First sentence:  "Was she dead?"

J.D. Robb's 44th book in her In Death series, Echoes in Death delivers once again.  The story is a bit dark and deals with couples being attacked, a  murderous rapist as well as spousal abuse.  Although I did kind of figure out who the culprit was halfway through, I enjoyed seeing how Eve figured it out. We didn't get to see the whole cast of characters this time except for an update on what they've been up too.  I love Eve and Roarke and can't get enough of Robb's In Death series. I'm currently rereading the series and discover something new with each read.