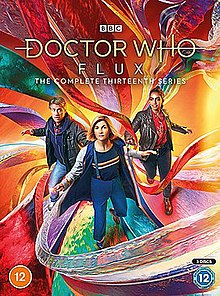 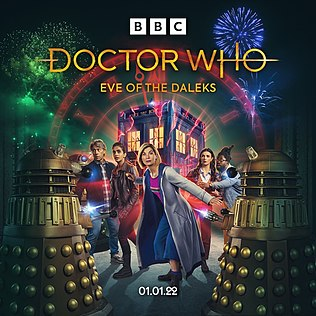 Welcome back to the Whoniverse, after dealing with the Revolution of The Daleks, we're now diving into Jodie Whittaker's final season and the start of her final year as The Doctor with the multi-part storyline Flux and the New Year's special Eve Of The Daleks (no, not Evil of The Daleks, that's a different tale from the other story). So, lets begin, starting with Flux.

Flux is, of course, a multi-part story that makes up the entirety of Series 13 of New Who, it sees The Doctor, Yaz and a multitude of allies struggling to save the universe from The Flux, which is being engineered by The Division, which served the Time Lords and The Doctor served under well before she became the Time Lord known as The Doctor.

Airing from October 31st to December 5, Flux was a massive storyline that was just as ambitious as it could get with Chris Chibnall and his team throwing everything they had at the sink to make sure this storyline was the biggest one yet. Not only did you have The Flux event, but you had the Sontarans, villainous newcomer Grand Serpent, the Weeping Angels and so many others for The Doctor to deal with. And of course, we had Swarm (an old enemy The Doctor faced in a mysterious old life).

Series 13 sees the introduction of The Doctor's latest companion, a Scouse named Dan Lewis played by British comedian John Bishop. Dan joins The Doctor after he's seemingly kidnapped by a dog-like Lupari known as Karvanista, who is revealed to be an ally of humanity and formerly an ally of the Division (which of course worked for The Time Lords).

Plus, the Timeless Child plot point from the past few seasons is somewhat expanded on throughout the storyline as we learn more about the Fugitive Doctor/Ruth Clayton, who apparently ended the Dark Times and was the incarnation of The Doctor who defeated Swarm a long time ago. And during the episode "Village of The Angels", we discover that there were Weeping Angels who worked for the Division, a big shocking twist considering the Angels attack other beings when not being observed.

And, in the very next episode "Survivors Of The Flux", The Doctor is "recalled" to Division and reunites with her former adoptive mother Techteun, who has long since regenerated into a woman, whom The Doctor briefly encountered during the events of the third episode in the Flux arc.

For a storyline that sees our show's heroes facing the end of the universe, Flux is as dark as it can get. The Flux tears apart the universe and hits Earth at the tail end of the first episode and things really get intense in Village Of The Angels (of course) when the Angels capture The Doctor while her friends Yaz, Dan and their new ally World War II veteran Professor Jericho from 1967 get sent back to the past.

Even the events of the next episode Survivors Of The Flux become grim during its final minutes when Swarm arrives at Division (located outside The Doctor's universe) and kills Techteun while Grand Serpent makes his move on Earth within UNIT after decades of planning as the Sontarans prepare to attack and the final universe-destroying Flux event looms closer and closer.

But thankfully, in the next episode "The Vanquishers", The Doctor and her friends manage to defeat Swarm and save the rest of the universe from being annihilated by The Flux. However, in the aftermath of the battle, The Doctor is told by the embodiment of Time that her end is coming, reminding us that Jodie Whittaker's Doctor will soon be regenerating just like with David Tennant's 10th Doctor.

Doctor Who Flux is mind-blowing, any Whovian who hasn't seen it yet should see it. I give the entire season a strong 9/10, this was very good from start to finish, Chibnall and his team knew what they were doing and the characters were engaging as usual.

Airing on January 1st of this year, just weeks after The Vanquishers, EVE sees The Doctor and her friends in a warehouse facing off against a squad of Execution Daleks, who are out for vengeance after The Doctor helped devastate their race with The Flux during the events of the previous episode, while a malfunctioning TARDIS creates a time loop which goes into effect whenever the characters die.

Just like past episodes and Dalek stories, Eve of The Daleks is quite a ride from start to finish, Nicholas Briggs once again brings his A game to the table as the menacing voice of The Doctor's greatest enemies and it seems Whittaker had a ball when it came to confronting these monstrous mutants from the planet Skaro. Plus, dealing with Daleks during a time loop has never ever been done before.

Chibnall seems to enjoy writing The Daleks just as he's enjoyed writing the previous episodes not based around them, he knows how to make them menacing and the Daleks continue to stay true to their roots as evil menacing monsters out to exterminate those who are inferior to them while The Doctor works out a plan to stop them as the companions do what they can to help.

Despite being an intense and chilling story, for a New Year's special, Eve Of The Daleks somewhat serves as somewhat of a breather episode after the grim events of Flux despite having high-stakes as the clock approaches midnight with each time loop. But thankfully, The Doctor and her crew manage to destroy the Daleks and escape the warehouse they were trapped in for the duration of the story.

My score for this wild Doctor Who story is a very, very strong ten point five. May the fine folks at the BBC continue to make Whovians happy for many more decades, even if the show goes off the air and the only Doctor Who media we have to take in are books, comics and audio adventures. With that, I say farewell to you all for now, may we meet again as The Doctor's regeneration looms closer...