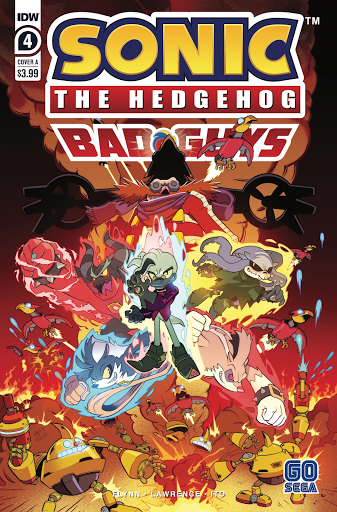 Who saw that coming? I DIDN'T!

Looks like Starline is officially an independent villain, we will see him later in the main IDW Sonic series. As for Mimic, he'll be back at some point, so will Rough and Tumble. As for Zavok, oh boy, looks like Sonic and friends will have their hands full when they have to contend with him and his pack again in the future, probably during 2021. *POSSIBLE SPOILERS*

Ian Flynn did it again with noooooo SEGA mandates holding him back, he delivered perfection, total awesomeness and a superb and masterful story worthy of Sonic.

I look forward to eventually seeing Eggman and Starline coming into conflict with each other, duking it out to see who is supreme. 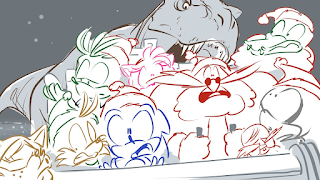 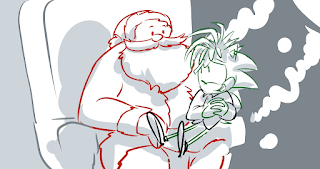 Howdy doody, folks! Its been ages since I reviewed the Christmas with Sonic series in its entirety and now its finally time to review the latest episode after a good long while of waiting. The wait is over, we shall be reviewing A VERY MERRY CHRISTMAS WITH SONIC, the finale to the famous and beloved Christmas with Sonic series thats been going on since the far off year of 2011.

And boy, what a finale it is/was. Santa Claus finally showed up, time travel shenanigans happened and a whole lot more happened. The plot's simple: After Sonic and Robotnik aka Eggman accidently injure Santa Claus himself at a mall during one of their battles, they and Sonic's friends and family have to take Santa's place as the one(s) delivering presents to people around the world on Christmas Eve.

Over the course of twenty three minutes, which makes this episode just as long as the other Christmas with Sonic episodes, Balena Productions' Steve Page once again does his best to deliver the most awesome Sonic goodness any Sonic fan can ever desire, he puts all his heart and soul into such incredible fan storytelling and this shows with the animation and the voice acting.

As someone who saw all the episodes, this one was worth the wait. I was fine with the delay and the fact it was gonna initially come out in 2019, but things happen. Either way, this episode was a solid finale to an awesome series and wrapped everything up nicely. That last after-credits scene with Sorass the dummy Echidna was very funny, despite the fact that I did not laugh. Eh, whaddaya gonna do?

My score for this cool show is a twenty over ten, this was amazing, full of awesomeness and something all Sonic fans should see if they want to, even on Christmas. Well, this is where I take my leave for now and I proudly salute Balena aka Steve for being an amazing Sonic fan who does not disappoint. 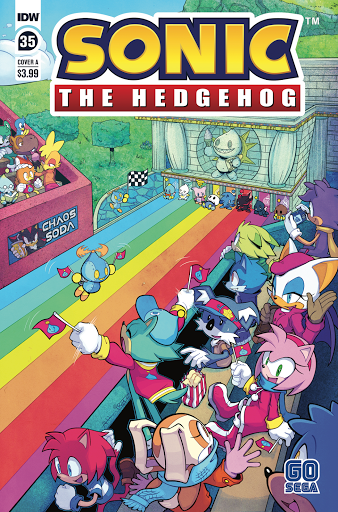 Hey folks, sorry I took so long, but I'm here to review this awesome issue.

So what happens here?

Big news folks, THE MYSTERY FIGURE IS DOCTOR STARLINE! Yup, Doctor Starline's involved. Who could've seen that coming? Well some folks did, I wasn't sure and I didn't pay much attention. So, what do I think of this issue? Its real good, has lots of awesome action scenes, a fine intro, good character moments and Shadow is well written for the most part.

Yes, I think Shadow is being well written right now under Evan (not saying Ian was crap), its clear that SEGA's loosened up and its a sign they'll drop the strict mandates they've imposed on him. As for Starline, it almost makes sense for the most part since this arc is coming out at the same time the Bad Guys miniseries is coming out. Issue 4 of it will soon drop along with IDW Sonic #36.

Even under a different writer, the Sonic comics are just as great as ever. Evan really knows how to write as much as Ian does, even folks like Ken Penders or Karl Bollers knew how to write IMHO for the most part but thats a different story. Either way, the issue's a fun ride from start to finish.

My score for this is a 10/10, solid arc finale set up. My apologies if I'm not summarizing the whole thing or giving a whole ton of thoughts, but a lot is happening.