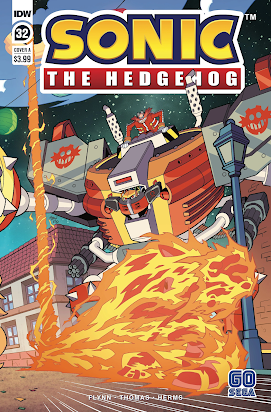 Welcome back, Sonic fans. Well, this is it, 32 issues into IDW Sonic and we just went through a big arc. Not only that, but we've reached the end of Ian Flynn's run as head writer... for now. We've been through so much, now lets see how Ian's final (for now) issue in his IDW Sonic run goes.

Where we last left off, the heroes were beginning to throw a party to celebrate their victory over the Zombots when good old Doctor Ivo Eggman Robotnik launched in attack in a new mech powered by Omega. As the issue begins, Eggman declares himself the greatest party crasher in the history of party crashers and is delighted that all of Sonic's friends are gathered in one place so he can destroy them all.

The heroes launch an attack on the doctor and the battle is on with them putting up a struggle, Gemerl is somewhat of a casualty as Eggman pulls him into his mech. So far, while there is a stalemate, the heroes are not doing well. There is only one person who can help and thats Sonic.

Ah, Sonic... or should we call him Mister Needlemouse... is in the Sol Dimension, so the heroes have to do it alone. There is a bit of progress when Tails, with Rouge's help, hacks into Eggman's mech and Omega starts to try and free himself only for Eggman to take back control ASAP!

Over in the Sol Dimension, after Sonic/Mr. Needlemouse returns from a run, Blaze, in an attempt to cure Sonic's amnesia, brings out the Sol Emeralds and turns into Burning Blaze. This causes Sonic to get his memories back and Blaze returns him home in time to defeat Eggman.

After the doctor retreats, Sonic has a heartwarming reunion with his friends before helping them clean up the mess from Eggman's attack. Following that, Sonic races off to go find some adventure as the issue ends.

Ian's last issue as head writer for the time being is amazing, it had lots of good moments and a really epic battle with Eggman. After 32 issues and two years, IDW Sonic has become a big success in the franchise and is the best up there with Archie Sonic.

With the Metal Virus saga behind us and Ian stepping away for now, its time for more adventures as Evan Stanley takes the reins as lead writer. Lets see what she has in store. 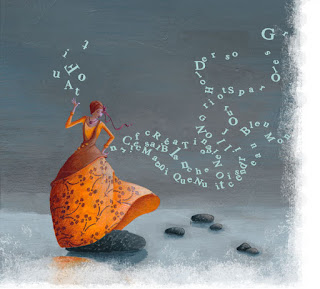 He yells,
awakening me from sleep
I'm  fighting a war, saving the world.
He won't remember when he wakes
the glorious battle he fought in the deep.
Did the hero win?
Hubby mumbles and nudges me
waking me once again.
The cell phone dings and we
can't ignore the beep or blip or ring,
no matter where or when.
Even with my glasses, too bleary eyed to read.
It's not an emergency.
It's nothing, I say,
just the stupid phone with a mind of its own.
Gracie nudged me in the  back
purring like a tribble.
Images of Star Trek space battles
coalesce and thoughts start to roam
from here to there and everywhere.
Who'd let the damn cat in?
Unable to sleep, I rise to write
and characters interject, telling me what to say.
I give in and let them guide the pen.
The story works when I get out of their way.
When all is said and done,
tired, yet wired,
It's time to begin my day.
at September 22, 2020 No comments:

Email ThisBlogThis!Share to TwitterShare to FacebookShare to Pinterest
Labels: 2020 Writing, A to Z Poetry, Writing - Poetry 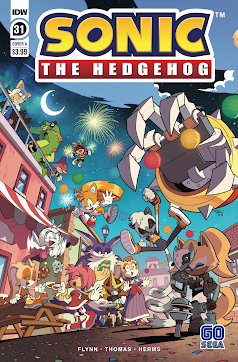