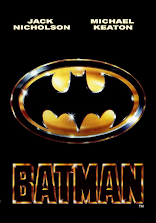 Greetings, fellow movie viewers and superhero nerds. Welcome back to the superhero-verse where we once again discuss something related to DC and its brooding Dark Knight known as Batman. But its no crossover film or a comic we're discussing, its one of the biggest blockbusters of the 20th century, a piece of classic 80s cinema. That's right, we're talking about... BATMAN!

However, this is not the Dark Knight's first live-action project, Batman got a TV series of his own way back in the 1940s known as Batman & Robin with the caped crusader played by Robert Lowey. Almost a few decades later, we got the 1966 show BATMAN (which was a campy and more light-hearted take on the Dark Knight) starring Adam West and that spawned a made-for-TV movie.

It wouldn't be for another decade and a half until a true Batman movie came to life, one that paid respects to the Dark Knight's roots with the well-known Tim Burton at the helm. Today, we're here to discuss Batman 1989 (or just Batman), starring Michael Keaton as the Dark Knight and Jack Nicholson as the Batman's crazy nemesis The Joker (aka Jack Napier).

And for those who saw the campy 1960s show hoping for something fun on the same level as the old show, you're out of luck. This movie is rated PG-13 and it pushes it in many ways possible as it returns Batman to his dark and serious roots with lots of action, even The Joker is downright scary as he is meant to be. Tim Burton did not pull any punches, especially when he gave this film his own flavor.

Jack Nicholson, who was already known for certain movies like THE SHINING at the time, really sold it as the menacing Clown Prince of Crime, making him somewhat faithful to how The Joker is portrayed in the comics. Once you've seen what he does, that's when its clear you're no longer in the 1960s era of Batman. From here on out, its dark and gritty territory from here.

Michael Keaton handles the role of Bruce Wayne/Batman very well, playing the seemingly normal rich businessman and the black-clad protector of Gotham. He sells it well, especially when the character is thinking of his parents and what he went through that dark night in the alleyway when the man who would become The Joker killed Thomas and Martha Wayne.

That's right, the one who shot and killed Bruce Wayne's parents in this continuity is The Joker. Usually, in traditional Batman stories, its a regular small-time criminal named Joe Chill who does the deed, but having The Joker be the one pulling the trigger is one heck of a twist with Joe Chill being an accomplice of the man who'd later become the clown prince of crime.

For its time, Batman 1989 is an unforgettable experience and an incredible piece of 1980s cinema, especially at a time when the superhero genre wasn't as big as it was now. The musical score (some of which is heard in the LEGO Batman games) is well conducted, even the cinematography, special effects and scenery are fantastic. Heck, Gotham City itself looks amazing in several shots.

Tim Burton and his crew did their best, making sure that Batman '89 was the best it could be and the film was both a critical and financial success, leading to the sequel Batman Returns.

The action scenes are very decently choreographed and the makeup department worked hard to ensure that Jack Nicholson resembled the character of The Joker very well. Even the tone of the movie has a well-found balance between dark and serious and lighthearted when its time to breathe between intense scenes.

Overall, Batman (1989) is a good experience from start to finish with the finest acting and casting choices in Hollywood history, good cinematography and a story that stays true to the core of what Batman is all about. My score for this film is a 10/10, if anyone has time, go watch this movie. I really had fun seeing it, so did my parents and everyone else. Now, I take my leave.

Good night to you all, fans of the Dark Knight.