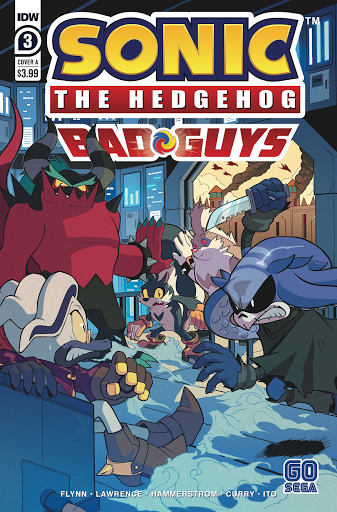 Welcome back folks, we're in the home stretch with this one, issue three of the Bad Guys IDW Sonic miniseries is here and its time to summarize. Last time, Doctor Starline, Zavok, Rough & Tumble and Mimic attacked an Eggman base and stole some power cores from Sonic Heroes while trying to trick Eggman into believing that Sonic attacked the base. Now, lets see how things play out, eh?

Our tale begins with Doctor Starline at his computer, watching one of his own Vlogs which talks about how his plan has been a success so far and how he will soon dispose of Mimic and the others. Then Zavok comes in and its revealed that "Starline" is Mimic in disguise and the real Starline is asleep, however, the bad guys now know of the doctor's intentions.

Regardless, they intend to play along with Doctor Starline's plans for the time being and make their move later though Mimic wants to kill Starline now rather than wait until later. The very next day, the bad guy group heads over to the main EggNet headquarters and launch their attack on it, deploying the power of the Power Cores to good use as they smash robots and fight their way inside.

While that is happening, Eggman, who is at one of his bases, gets ready to fight his enemies as he deploys his forces when Orbot comes in with some intel that Sonic is attacking a depot in the north which raises suspicion from the doctor as his lackey bot suggests that Tails sent a dummy transmission before Eggman hops into his Egg Hawk and heads off to battle with his enemies.

Who sent the "dummy transmission"? Well, Starline and his crew did that, as they were taking the main room of Eggnet HQ. However, just as Starline is taking care of buisness on the computer, Mimic and the others begin to turn on him. In order to save himself, the platypus does Mimic the favor of deleting his files from the Eggnet and gives Zavok total control of Eggman's army. Unfortunately for Starline, Zavok and his group decide its time for Starline to be disposed of, having served his purpose...

The ending of this issue was decently written and sets up the finale nicely, I wonder where things will go from here. Hopefully it'll be good, we know Ian is a good writer and can accomplish anything despite running into roadblocks i.e SEGA restrictions here and there. After this series is over, its gonna be a while before we hear from Ian Flynn on the writing front again.

Starline is amazing and I hope he shows up in the games, Zavok's being written well and the other villains are not so bad. I give this issue a 9/10...

Bye folks, see u in the final issue. 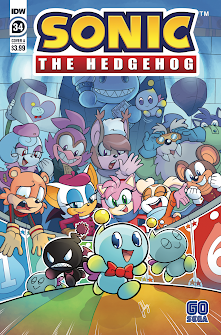 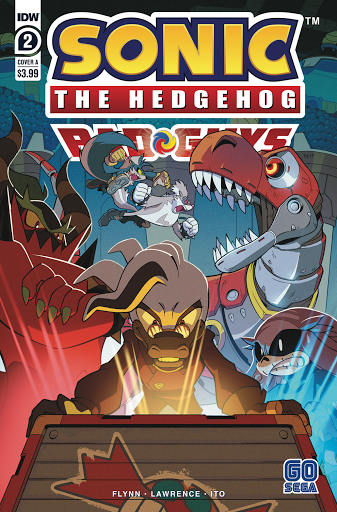 Welcome back, IDW Sonic fans. BAD GUYS issue 2 is here and you know what that means.

Where we last left off in issue one, Doctor Starline busted Mimic the Octopus, Rough and Tumble and Zavok out of jail and they got out of there in one almost iconic jail break sequence. Now, its time to see where they're going in this one.

Its simple, Doc Starline and his team attack an Eggman base and they do some damage. In fact, they also try to make it look as if Sonic attacked the base. Very cleaver, I bet Eggman's gonna buy that and, er, he almost does but he sees through the flaws and quickly figures out that somebody else is to blame even though he has yet to know who it was.

My thoughts on the issue?

Well, it was great, Ian Flynn did a masterful job like he always does. He went all out with no SEGA mandates holding him back, Ian always tries to go all out with his storytelling despite being held back most of the time by stuff behind the scenes. Nothing to worry about.

Halfway through this epic miniseries, I am enjoying this ride.

Lets hope the Sonic comics get more cooler during Sonic's 30th anniversary in 2021.

Sorry if the review was short, but I don't have a whole load of thoughts. See you later, ya'll.