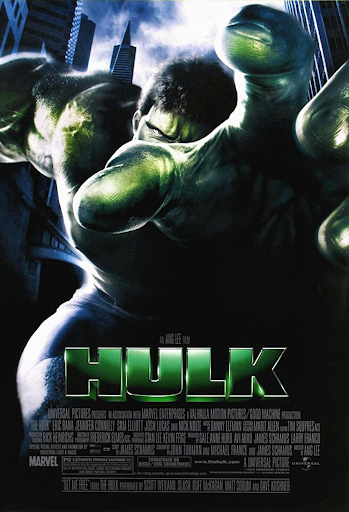 Released in 2003 and starring Eric Bana as the scientist Bruce Banner and his alter ego known as The Hulk, this movie made a lot of money and was kinda mixed with both fans and critics. However, this movie's legacy lives on to this very day, but plans for a sequel were scrapped and the next Hulk movie titled The Incredible Hulk released five years later as part of the Marvel Cinematic Universe.

I saw this film back in 2018 when dad got it on DVD and I watched it again a few years later. And despite what the critics say about films like this, Hulk isn't too bad. Its actually fun, just like every film we've seen that never performed well. Eric Bana was the perfect fit for Bruce/Hulk at the time, even though Mark Ruffalo does play him well nowadays in the MCU.

So, what's the story?

Scientist David Banner, after running experiments for the millitary, getting canned by General Ross and experimenting on himself, has a son named Bruce who picks up some of his father's mutating DNA. David gets into a fight with his wife and kills her when he tries to kill Bruce, who is then put into foster care. Years later, Bruce attends a college and winds up getting dosed with gamma radiation during an experiment.

After a reunion with his father, who has aged since Bruce was a boy, and learning the truth that was hidden from him, Bruce becomes angry and turns into a green monster, he wrecks the area and terrifies David before going on the run. David is then visited by Bruce's partner Betty, who questions him about his work, and later experiments on his dogs, turning them into monsters and sending them after Betty.

Bruce turns into the Hulk and saves Betty from David's dogs, but then Betty calls her father General Ross a day later and the army takes the now-captive Bruce to their base in the desert. But not long after, Bruce transforms into the Hulk again and breaks out, going to San Francisco. Once there, after a fight with the army, Bruce sees Betty and calms down. Meanwhile, David runs another gamma experiment on himself and becomes an entity similar to the Marvel villain known as the Absorbing Man.

David visits the captive Bruce and has a chat with him, revealing that he's become insane and bites down into a power cord, which triggers his transformation into an energy creature when Ross powers it up. Bruce turns into the Hulk and battles his father until he gains the upper hand and the general deploys a Gamma Charge Bomb against both Hulk and David. However, Bruce survives and goes into hiding in the Amazon as a medical doctor.

Many months later, during Bruce's exile, a group of regime soldiers arrive to harass a group of locals and Bruce confronts one of them. "You're making me angry..." He says, "You wouldn't like me when I'm angry." And the film ends with the roar of the Hulk.

That's pretty much the movie. And as I've said before, I think its a decent movie. It may have some issues and dated effects, but the experience isn't as bad as some people would try to make it out to be. The acting and the dialogue looks fine by today's standards and the plot is easy to understand once you know what's going on. HULK gets an 9.9 out of 10, this film is worth multiple viewings.

As of this post, there is a rumor that the Eric Bana version of Bruce/Hulk will appear in Sam Raimi's Doctor Strange & The Multiverse of Madness. If that is true, then that would be fun to see, anything is possible with the multiverse and multiverse stories can be big (but not big as in the ambitious kind). Now, I sign off with an optimistic smile. See you later, comic book and movie nerds.