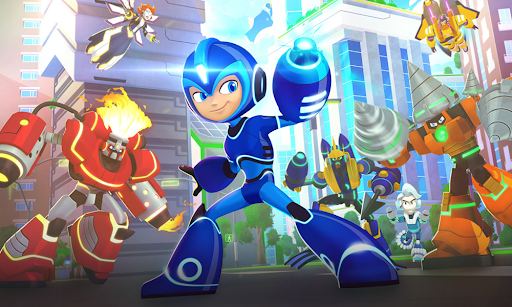 Hey guys, its been a while, but I'm here to review the MEGA MAN FULLY CHARGED animated series from Wildbrain Studios and Man Of Action Entertainment. Been quite a while since I last covered something related to Mega Man, last Mega Man-related content that I covered was the Archie comic and the first crossover between Sonic & Mega Man.

Don't worry, I will review the Mega Man fan film and some of the Mega Man games (including Mega Man X) in the future. But for now, we're talking FULLY CHARGED.

This is perhaps one of my favorite shows and favorite video game-inspired mediums, its fun and engaging, and it started airing on my 19th birthday the year it started. That's right, one of my favorite birthday gifts is the TV show MEGA MAN FULLY CHARGED. Its too bad this show didn't get a season two, but at least I can re-watch this and reread the Fully Charged comic eventually.

So, what is so special about this show, you are asking.

While the show is somewhat faithful to the games (just like the Ruby Spears cartoon apparently), MEGA MAN FULLY CHARGED takes place in a different universe and has its own unique style. This is due to the fact Capcom actually gave the writers at MAN OF ACTION permission to do their own thing with Mega Man but do it in a way without taking away the spirit of Mega Man.

In this universe, instead of being named Rock and having a robot sister named Roll, Mega Man is named Aki and he has a human sister named Suna. Also, Doctor Wily is not the show's antagonist, the role of which falls to an extremist named Sergeant Night, who is unmasked by the heroes at the end of the show. However, Wily has a nephew named Bert Wily and the doctor himself appears in the comics.

On a related note, Mega Man has a little robot assistant named Mega Mini, who is basically a voice in Mega Man's head. Meanwhile, the backstory of the world the characters live in revolves around a period called the Hard Age where humans and robots fought each other. Sergeant Night, the show's villain, is fighting to bring back that old feud between humanity and robotkind.

Luckily, Mega Man is on the scene to save the day, opposing Sgt. Night and the rogue Robot Masters, many of which are either derived from the video games or are completely new characters. The writers put their time and effort into this show, even the animation is well-polished. CGI cartoons are just as good as 2D cartoons, at this point, Fully Charged is my number two favorite video game cartoon next to Sonic Boom.

From August of 2018 all the way to May of 2019, this show ran for a total of 52 episodes that were eleven minutes, just like the Sonic Boom episodes. Funny how that animation studios behind video game cartoons are almost obsessed with shows that have eleven minute episodes, hopefully, there will be video game shows in the future that will have thirty minute episodes.

Now, did I read the MEGA MAN FULLY CHARGED comic by Boom Studios?

Not that bad honestly, its nice to see a Mega Man comic and that Fully Charged got a continuation in some capacity. Cancellation is just sad, it would be even greater if the show's universe received a further continuation in the future if there is enough fan demand from passionate fans. Capcom, you gotta continue Fully Charged. Don't leave it in the dust, find a way to give it a proper conclusion.

Small nitpicks aside, if there are Mega Man fans out there who want to see a good show like this, watch Fully Charged. You're not gonna find anything better than this one, Fully Charged may as well be the king of Mega Man extended media and video game TV shows if it got to be.

MEGA MAN FULLY CHARGED gets an 8.5 out of ten. Fun, action-packed, engaging and never soulless or bland, this show cannot be forgotten and its legacy will continue on for years to come.

Have a good day, Mega-fans.