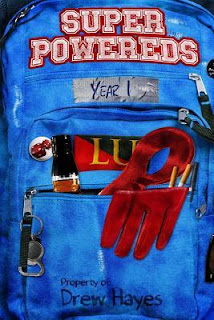 For Christmas I received the Super Powered Series from my brother which are by an author I never heard of before, are super chunky, about college students who were extra special, enrolled in a Hero Certification program. The books were previously a web novel so I thought, Oh boy, I hope they are good.  I knew nothing about the series but a friend had read his other series, Fred the Vampire Accountant and liked the author.  So I dove in.

"Knowledge is power. That would be the motto of Lander University, had it not been snatched up and used to death by others long before the school was founded. For while Lander offers a full range of courses to nearly all students, it also offers a small number of specialty classes to a very select few. Lander is home to the Hero Certification Program, a curriculum designed to develop student with superhuman capabilities, commonly known as Supers, into official Heroes.

Five of this year’s freshmen are extra special. They have a secret aside from their abilities, one that they must guard from even their classmates. Because for every one person in the world with abilities they can control, there are three who lack such skill. These lesser super beings, Powereds as they are called, have always been treated as burdens and second class citizens. Though there has been ample research in the area, no one has ever succeeded in turning a Powered into a regular human, let alone a Super.

That is, until now…"

Think of Super Powereds as a light hearted Harry Potter, but don't forget HP got darker with each book.  Easy to read since it was originally published as an online book to be read chapter by chapter. There are just enough clues and mystery to intrigue you enough to keep reading. The characters, both kids and adults, are engaging, devious, distrustful, and wary enough of each other that it keeps them from forming attachments until they gain each others trust. Yet, still each one of them has something to hide. Super Powered Year One made for an interesting read and enough so to go on to the second book.  Yeah!