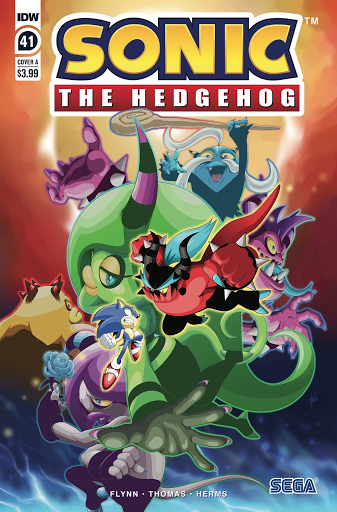 Salutations once again, IDW Sonic fans, its time for another story arc. But this is a special one, we're hunting Zeti and Ian Flynn is back to write this one. That's right, Ian Flynn has returned to the writer's chair to take care of a dangling Metal Virus saga plot thread: The Deadly Six and the fact they're still on Sonic's world. This one is pretty good so far, Ian's not held back by that much limitations from SEGA.

Right off the bat, we start out with a battle between Sonic and Eggman in a snowy village and Eggman gets angry when Sonic calls him "Baldy McNosehair". That's right, most of the fans aren't the only people who don't like that joke from Sonic Colors. The Meta Era haters have made themselves heard, a nice nod to the 2010s before Sonic moves into a fresh new era.

Moving away from Sonic vs Eggman, Zavok reunites with the other Zeti and they start causing mayhem and destruction that attracts the attention of The Restoration, leading to Tails contacting Sonic at the end of the issue. Just like that, "Zeti Hunt" has begun. I will say, Ian did a great job, I'm impressed with the writing and the characterizations are pretty colorful.

With this issue behind us, its time to look forward to the rest of the arc and enjoy some Sonic 30th Anniversary goodness that involves Sonic's past self aka Classic Sonic. Later, fans. This issue gets a 9/10, no big flaws, nothing worth hating. It's just pure Sonic goodness.