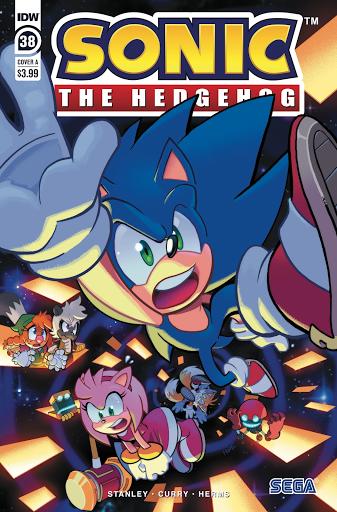 Salutations, Sonic fans. Sorry it took a while, but I'm here to give my thoughts on the latest issue of IDW Sonic and part two of Test Run. Thats right, we're halfway through Evan Stanley's second IDW Sonic story arc and things are really getting good when they really get good.

Where we last left Sonic, Tails and Amy, they got to Eggman's weird tower and got stuck in a maze before Sonic ran around the maze at high speed and smashed through the wall with help from Amy and her hammer, this lead to Sonic and crew falling through a space void. Meanwhile, Tangle and Belle decided to go investigate the situation involving the strange weather off the coast.

Sonic, Amy and Tails manage to get out of the space void only to end up in a creepy abandoned town, which has the same strange space-time properties as the maze they escaped from. The trio enter a house and encounter new Badnik hybrids. Meanwhile, Tangle and Belle break inside Eggman's new base and overhear Orbot and Cubot talking to Eggman. After that, Belle has an encounter with Egg Pawns and its made clear that she's basically a Badnik but Tangle is still cool with her.

Back in the strange Badnik-filled house, Sonic, Amy and Tails are contacted by Eggman, who taunts them and declares they're now his new test dummies for his new Badniks and the issue ends with Sonic and crew preparing to fight Eggman's Badnik hybrids.

I will say, Evan knows how to write a story as much as Ian Flynn does, especially since Evan did read Ian's stuff before becoming part of the Sonic comic staff years ago. The cliffhanger was quite amazing and I look forward to part three of the short story arc as much as I look forward to the future of IDW Sonic going forward during the blue blur's thirtieth anniversary year and beyond.