Book Five: Kitty and the Midnight Hour by Carrie Vaughn 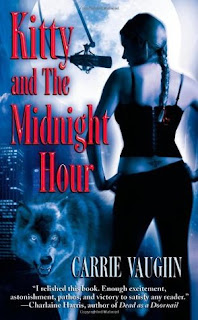 Kitty and the Midnight Hour is the first book in the Kitty Norville series by Carrie Vaughn. I Needed a brain bleach after my last read and Vaughn's filled the bill.

"Kitty Norville is a midnight-shift DJ for a Denver radio station - and a werewolf in the closet. Her new late-night advice show for the supernaturally disadvantaged is a raging success, but it's Kitty who can use some help. With one sexy werewolf-hunter and a few homicidal undead on her tail, Kitty may have bitten off more than she can chew!"

I remember I first read the series back in 2013 and enjoyed the heck out of it.  It's totally unintentional but it seems I've been going back to books I read in 2013 for some reason.  Like 1Q84, I hardly remembered a thing so it is like reading again for the first time.  Stands the test of time. I was glad to see Kitty grow out of being a submissive wolf throughout the story and stand up for herself.

I'm sure I'll be revisiting the rest of the series over the next few weeks, in between my other newish reads.