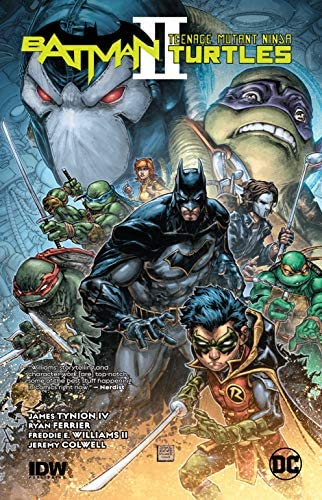 Hello, old friends. Welcome back, we are about to once again delve into the crossover-verse and tackle another story of Batman and the Teenage Mutant Ninja Turtles.

That's right, we're taking a look at the sequel miniseries to the first Batman/TMNT crossover released a year prior. IDW and DC are once again collaborating on this epic crossover event continuation, which takes place well after the events of the first crossover.

I got my hands on this on the same day I got one of the latest IDW Sonic comic issues (as of this writing) during my usual weekly trip to the local comic book story and read it all, just like with the first crossover story. And believe me, it is awesome.

Seeing well-received crossovers get follow-ups is very heartwarming and its nice seeing two companies collaborate on bringing them to life, especially when said companies are very open to the ideas of crossovers without it messing with their brands' image since they usually aren't canon anyway.

Batman/TMNT II is very entertaining and worth reading, just like the first story. I don't have a whole lot to say about it, but I'll say that it is amazing and so worth getting. The comic gets a decent score of a 10/10, superhero comics never lose popularity or their value, hence why we will keep reading them.

See you next time!