Book Review: The Daughter of Time by Josephine Tey 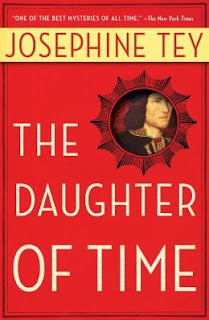 Inspector Grant's recuperating in the hospital from an injury during the line of duty. He's bored out of his mind and becomes enamored with a picture of Richard the III and if the story was true that he killed his two young nephews. Grant involves everyone in his mystery from the medical staff to his friends while he reads everything he can about Richard. Along the way he uncovers the historical facts are tonypandy - historical events that were well-accepted but not reported accurately - in books like Sir Thomas More which Grant discovers were all hearsay since More was too young at the time of the event. Fascinating story and I will never think of history in the same way again.