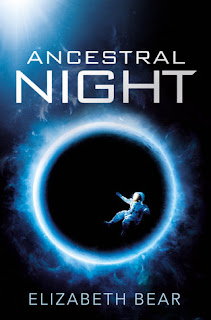 The third time is the charm. I had difficulties getting into Elizabeth Bear's Ancestral Night and almost gave up on it. However, I gave it one more try and became quickly engrossed in the story.  Timing I guess is everything. The story sucked me in and I had a book hangover when I finished  My mind was full from the vastness of outer space and all that happened and I had to sit with the story for a little bit.

This was a very complex story involving philosophical, cultural, political, and psychological themes as Hamiey Dz, her partner Connla, and the ship mind Singer, find evidence of a major crime, run afoul of space pirates and are chased through deep space to space stations to deep holes to the very center of the galaxy.

Mix in altered memories, a computer in your brain to regulate emotions, plenty of discussions about  right and wrong, throw in ancient sentient space whales, an anthromorphic praying mantis and other interesting creatures as well as a whole new language to learn.  I tried looking up a few words which I soon realized didn't have real world definitions and just went with the flow, figuring out what words meant by context.

Ancestral Night is an entertaining, intriguing, and illuminating story with plenty of humor to balance out the angst.  The story involves so many things to think about it will be well worth a reread.  Maybe in about a year or so. LOL!