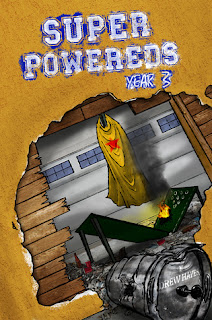 Finished Super Powered Year Three by Drew Hayes. The paperback book tried to condense 900 pages into 600 pages so the print was really small so I read an ebook version instead. This one was packed with lots of fights, both sanctioned, and one huge non sanctioned that could have gotten the college kids thrown out of the Hero Certification school. The rest of the kids are fine tuning their skills and Vince is being watched due to his being kidnapped by George in the last book. Chad and Angela’s relationship is highlighted quite a bit and he moved into the Dorm with Mary, Alice, Vince, and Ron/Hershel. Lots of twists, humor, and team building. Nick has returned, living off campus and attending regular classes while trying to recover his memories and looks like he may be involved in a long con. A rival family’s son from Vegas is out to destroy Nick by any means. Enemies combine to attack not only Nick, but the Super Powers and rather than sit out the fight safely in lock down, they choose to protect the normal staff and kids on campus. Looking forward to reading Super Powered Year four. My brother was right. These will be well worth re reading again.