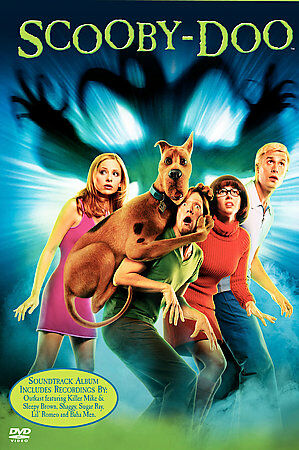 That's right, we're reviewing the first live-action Scooby Dooby Doo movie released in 2002 almost twenty years ago as of this one. What makes this film so special, you may ask?

Well, it got me back into Scooby-Doo after I spent so long away from it, even though, at the time, the only Scooby-related thing I'd done was the Spooky Swamp Mystery video game on the Wii. It may as well have fully reignited my Scooby Doo fandom as, since then, I've been watching Scooby-Doo stuff now and then and I'm soon going to watch the SCOOB movie!

So who plays the characters in this movie, the cast is very important after all. Well, right off the bat, Freddie Prinze Jr. plays the role of Fred, the leader of Mystery Inc.

As for the roles of the other characters, well, its simple. Neil Fanning voices Scooby Doo, Mathew Lillard plays Shaggy, Sarah Michelle Gellar is Daphne Blake and Linda Cardellini plays Velma Dinkley. The famous British actor Rowin Atkinson is in it as Emile Mondavarious and the role of the main villain of the film, Scooby's nephew Scrappy, is handled by Scott Innes.

Quite the cast, eh?

Now, lets stop wasting time and get to the story.

The film opens up with the Scooby gang tackling the Lunar Ghost haunting a shoe factory and, after some hijinks with Scooby and Shaggy's cowardly antics, they capture the ghost and unmask him as Old Man Smithers (played by the great Jim Cummings), who wanted revenge for celebrity Pamela Anderson turning him down when he wanted to go on a date with her. Poor Smithers, but crime doesn't pay in the end.

"I would've gotten away with it too if it weren't for your meddling kids and your dog." Smithers yells.

However, after the case is taken care of, the gang gets into an argument outside and, when Shaggy tries to defuse the situation, Fred, Daphne and Velma go their separate ways. Feeling upset by this, Shaggy and Scooby go off on their own in the Mystery Machine. By the way, I love the acting with this scene, Mr. Lillard sold it very well when conveying Shaggy's emotions.

A couple years later, Shaggy and Scooby are still on their own and doing what they do best. One day, while they're about to have lunch in the Mystery Machine by the beach, the two are visited by a man who works for Mr. Emile Mondavarious of Spooky Island, asking them for their help while promising Shaggy and Scooby they have an "all you can eat buffet".

The two head to the airport to go to Spooky Island and are reunited with Fred, Daphne and Velma, reluctantly bringing Mystery Inc back together. On the way to the island, Shaggy meets a girl named Mary Jane (no, not Mary Jane Watson, its just a name). The gang arrives at Spooky Island and quickly meet Mr. Mondavarious, who explains the island's tourists are being hypnotized.

Later, during a spooky party hosted by an actor named N'Goo Tuana and his luchador Zarkos, Velma discovers the island was once home to ancient demons, who now plot revenge on those who have taken over the place. The gang heads to a haunted castle attraction to look for clues and, after braving some dangerous areas, they find a hypnosis chamber while discovering and taking an artifact known as the Daemon Ritus before making their escape.

Back at the hotel, trouble ensues when Daemons attack and kidnap almost everyone in the area along with Fred, Mr. Mondavarious and Velma except for Scooby, Shaggy, Mary Jane and Daphne, who narrowly escape the attack. The next day, they notice something wrong when they see everyone acting normally and the hotel's windows restored.

However, when Shaggy and Scooby interact with Fred at a pool party, its clear that the Daemons have possessed the tourists including Fred. While on the run from the villains however, Mary Jane ends up getting possessed by a demon herself and Shaggy gets separated from Scooby before coming across a chamber with a vat of protoplasm that contains the souls of the possessed.

Shaggy frees Fred and Velma's souls along with Daphne's and they return to their bodies. However, a mix-up happens when Fred travels to Daphne's body while Daphne travels to Fred's body even though Velma is able to get her body back. While that is happening, its revealed that the Daemons are sensitive to sunlight when Velma opens a window when Fred takes Daphne's Demon-possessed body.

The gang meets up and try to fix everything and, after a lot of soul swapping, Fred is restored to his body and Daphne gets hers back. When investigating an explosion that came from the beach, they meet a voodoo man, whom Daphne met the night before.

The voodoo man explains that he's preparing for when the Darkopocalypse ritual happens as the Daemons are getting ready to take over the world for ten thousand years. After he leaves to figure out the right voodoo spell that can protect himself, the gang takes in what they learned and they realize the Daemons need Scooby for the ritual. Right at that moment, we learn that Scooby is meeting with Mr. Mondavarious who tells him that he would like him to be a sacrifice.

Mystery Inc formulates a plan to prevent the Daemons' plot from succeeding and head to the ceremonial chamber right to start their plan. But as they're getting into action, the ritual begins. Shaggy manages to free Scooby and make amends with him after a fight they had earlier while Fred and Velma tackle Mr. Mondavarious, who is revealed to be a man in a mask.

However, when they remove the mask, its revealed Mondavarious is a robot operated by *spoiler warning* former Mystery Inc member and Scooby's nephew Scrappy Doo himself. That's right, after Mystery Inc dumped him at some point in the past, Scrappy made his way to Spooky Island and took over before formulating his plan to conquer the world with the Darkopocolypse.

Shortly after his unmasking, Scrappy Doo, having absorbed enough souls, transforms into a giant monster and attacks Mystery Inc. At that very second, Daphne is battling the luchador Zarkos and knocks him into the chamber into the protoplasm vat, freeing the spirits and ensuring the Daemons defeat. Scrappy loses his power and gets knocked out by Scooby, his plan finally ruined.

The police arrived and arrest Scrappy along with his henchmen while everybody celebrates as the movie comes to an end. In a mid-credits sequence, with all said and done, Shaggy and Scooby finally hit that "all you can eat buffet" and eat some hot food to comical effects.

SCOOBY-DOO is a fun movie that's worth any Scooby-Doo fan's time, it is faithful to what inspired it and the story is an absolute blast to watch. Even the actors are very familiar with the characters they're playing, the effects seem to have aged very well, especially the CGI portraying Scooby. The film was so well-received and successful when it first came out, a sequel was released a few years later. This is a part of Scooby Doo history worth revisiting again and again.

Fun fact, James Gunn was involved with the project and it was originally gonna be R-rated. Thankfully, the studio made this film family-friendly. Who wants an R-rated Scooby Doo movie anyway? Scooby is family-friendly, not a raunchy comedy.

I am so thankful this movie reignited my love for Scooby, I give this film a ten out of ten. I see no flaws with this, the effects and the acting and the score are all well-crafted. Scooby Doo the movie is a product of its time and deserves the respect it got years ago. Live-action adaptations of animated properties are very fun to watch, just as animation is fun to see.