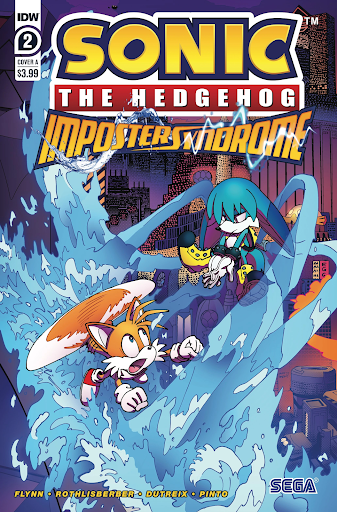 Welcome back, its here, the second issue of Imposter Syndrome is out.

What did I think of it? I can only say... Pure comic fun non-stop.

Without giving away any spoilers, I will say that Starline's characterization never ceases to amaze and Ian Flynn's ever-so masterful writing has delivered some quality character moments. Meanwhile, Surge and Kit are fantastic, they are compelling IDW characters and have been entertaining on the same level as Starline and other characters such as Tangle and Whisper.

So far, Sonic 2022 has gotten off to a great start, especially with this issue of IDW Sonic.

Let us hope that the IDW comics continue to evolve and advance as time goes on until they eventually come to an end before IDW Sonic becomes a "bizarre anomaly" just like Archie Sonic before it with its origins linking it to the infamous Meta Era of the 2010s taking place after Forces just as Archie Sonic was linked to the 90s with the first two games and AoSTH/SatAM.

Going off topic, sorry, but the art is phenomenal and there's nothing that ceases to amaze.

Anyways, I will see you later. Thank you for joining us today.