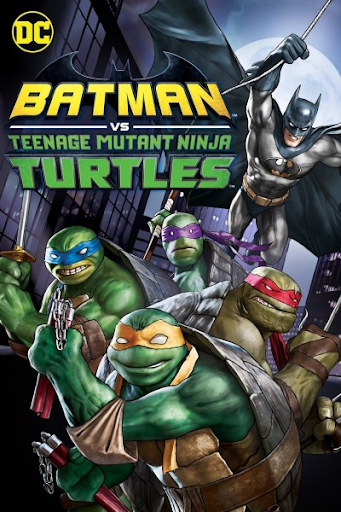 How do you do, people?

We're back... with a review of BATMAN... VS TEENAGE MUTANT NINJA TURTLES!

That's right, Batman and the Teenage Mutant Ninja Turtles have a crossover movie. Plus, this was basically my first true animated Batman movie I ever saw and I'd already seen the first TMNT movie several years prior.

I watched this back in 2019 and saw it again in 2021 after getting it on DVD, this film is unbelievably good and has some fine quality animation and storytelling. The voice actors really had a ball with this one, even the writers seemed to have quite a lot of fun too.

Fun fact, this is not the first time Batman and the Teenage Mutant Ninja Turtles have had a crossover. They had some crossovers in the comics beforehand, this movie is a bit of a loose adaptation of one of their first crossovers.

So, what's the story?

I'll give you a short rundown. Shredder teams up with Ra's Al Ghul to take over Gotham City and the Teenage Mutant Ninja Turtles team up with Batman, Robin and Batgirl to stop them before the two villains succeed in their heinous plan.

This movie is a love letter to Batman and the Teenage Mutant Ninja Turtles, even playing with all of the elements of both franchises, mixing the elements together to create one good experience. Seeing Joker get mutated into a snake by mutant mutagen is quite creepy and watching Scarecrow torment Leonardo with the fear of losing his brothers sure can give you the chills.

If you are a TMNT fan who wants to get into Batman or if you're a Batman fan who wants to see him interact with the Teenage Mutant Ninja Turtles, this movie is for you to see. But heads up, this film is very action-packed and it is PG-13, medium PG-13 as it nearly pushes the rating with the action as there are moments where you see blood.

My score for the film is a solid 9.5 out of ten, BATMAN VS TEENAGE MUTANT NINJA TURTLES is one of the greatest TMNT and DC experiences out there next to so many films like the 2007 TMNT film, the 1989 BATMAN movie and the LEGO BATMAN DC SUPERHEROES UNITE movie as well as the original Teenage Mutant Ninja Turtles movies.

Until next time, farewell, good friends.