In the Icelandic tradition - our Jólabókaflóðið - Christmas Book Flood 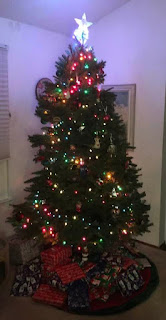 I kind of went overboard this year.  You know how they said to shop early because product and shipping will be in short supply and take a longer period of time.  Nope, I think they fudged it.  I bought early and bought often. Hubby did the same.  Happy birthday, Jesus. We celebrated with lots of love and happiness. 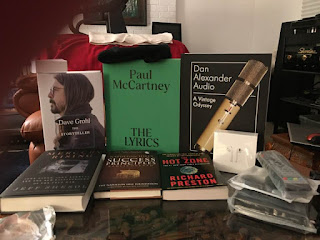 Right around Thanksgiving, Paul McCartney's memoir in music, THE LYRICS, was released and I immediately went to the store and bought it. Expensive, but well worth it. Hubby and I will get hours of enjoyment out of it. A couple years ago, hubby mentioned Dan Alexander Audio book and I saved it to my own private wishlist, nudge nudge wink wink, in hopes that someday it'd be available and the price would go down. Well, it became available but the price didn't go down, but I got it any way.  Hubby was surprised and amazed that I remembered something he'd mentioned so long ago.  Score! 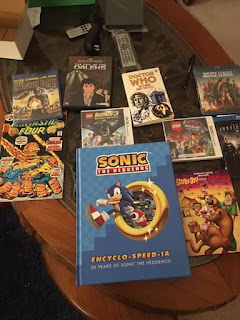 Second score of the evening was the Sonic Encyclospeedia.  Once James opened that present, he was a goner for the rest of the evening. The one who'd had his hand out excitedly for gift after gift said "I'll open the rest of my gifts in a while." 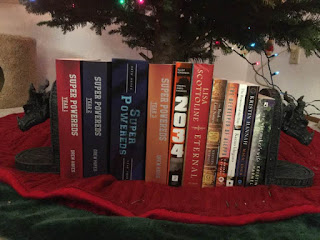 My book haul held a surprise from my brother. The entire Super Powered series which amounts to about 3400 pages. Hopefully like the Wheel of Time series, they won't take me several years to read. The rest all historical fiction. I look forward to diving in.   Oh, and did you notice the bookends. 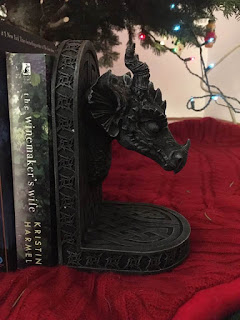 "And there were in the same country shepherds abiding in the field, keeping watch over their flock by night. And lo, the angel of the Lord came upon them, and the glory of the Lord shone round about them: and they were sore afraid. And the angel said unto them, 'Fear not:"

for behold, I bring unto you good tidings of great joy, which shall be to all people. For unto you is born this day in the City of David a Savior, which is Christ the Lord. And this shall be a sign unto you; Ye shall find the babe wrapped in swaddling clothes, lying in a manger.' And suddenly there was with the angel a multitude of the heavenly host, praising God, and saying, 'Glory to God in the highest, and on earth peace, good will toward men.'"

Many blessings to all this Christmas season.