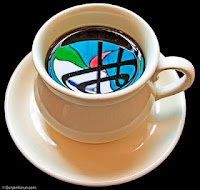 Once again I have a physical book, an ebook, and audiobook in progress. I used to be a monogamous reader and wouldn't think of mixing and matching, but now enjoy the variety so when I get tired of one, I can turn to the other.

I started listening to Tom Hanks Uncommon Type in the car which are literary short stories. Enjoying his humor.  For some reason I thought it was non fiction but the first story made me realize it wasn't when he mentioned watching Netflix with a date and I was like, what a minute, he's only a couple years only than me and Netflix didn't exist 30 years ago.  *facepalm*

Currently on page 165 on Wolf Hall. Yes, reading very slowly and only at breakfast time. It's keeping me from devouring the whole story in large gulps and not remembering most of it.  I'm at the point where poor Thomas has suffered many losses and the cardinal is in a world of trouble.

Quote of the day:

"He say to her, "I wish we have a baby, it seems such a long time since there was a baby in the house."

He does, of course. He says "Does John Williamson not do his duty by you these days?"

She says, "His duty is not my pleasure."

As he walks away, he thinks, that's a conversation I shouldn't have had."

I was in the mood, so dove into Cormac McCarthy’s  post apocalyptical story, The Road finally.  It’s one of the books on SWB’s Well Educated Mind fiction list of which I’ve read 13, I think.  I have to keep better track. Anywho, his writing immediately drew me in and the imagery really paints a dark story of hope and survival.

"A father and his son walk alone through burned America. Nothing moves in the ravaged landscape save the ash on the wind. It is cold enough to crack stones, and when the snow falls it is gray. The sky is dark. Their destination is the coast, although they don’t know what, if anything, awaits them there. They have nothing; just a pistol to defend themselves against the lawless bands that stalk the road, the clothes they are wearing, a cart of scavenged food—and each other."