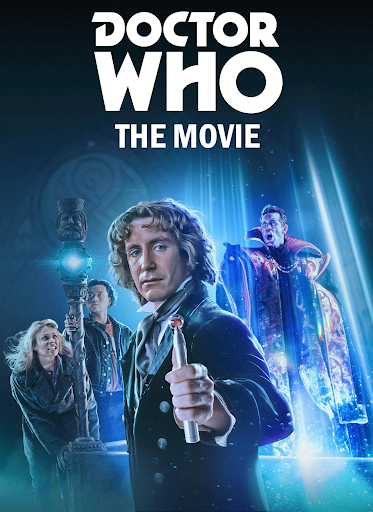 In 1989, a sci-fi phenomenon went off the air. Seven years later, the story finally continued... for one night only before it was resurrected for real nine years later.

Welcome back to the Whoniverse, friends. CVGWJames here, today we will be discussing the 1996 Doctor Who movie starring Paul McGann as the eighth incarnation of the Time Lord known as The Doctor as the Seventh Doctor's era with Sylvester McCoy properly comes to an end.

In the years between Classic Who's cancellation and this movie, there had been many attempts to bring back Doctor Who while many people attempted to make Doctor Who into a movie. Eventually, after many attempts and much work, we got this. So, what's the story?

Sometime well after the events of Survival, The Master has been executed on Skaro during a trial held by the Daleks, The Doctor's most feared enemies in the universe, and The Doctor himself is taking what is left of his Time Lord rival back to Gallifrey. However, death is not the end, especially for someone like The Master.

As The Doctor travels through the time vortex to Gallifrey in the TARDIS, a worm-like creature that is The Master gets loose and causes problems with the TARDIS' controls, causing the TARDIS to land on Earth in 1999 well before New Year's Eve. The Seventh Doctor steps out into San Francisco, only to end up getting shot by a pair of gangsters in the midst of a gang war going on.

Not long after, medics rush the wounded Doctor to the hospital and surgeon Grace Holloway is called in to help. However, due to a lack of understanding regarding The Doctor's Time Lord biology, the medics fail and The Doctor seemingly dies...

But once again, death isn't the end. The Doctor regenerates in the morgue into his eight incarnation and leaves after finding some clothes, but is confused about his own identity slightly. Meanwhile, The Master takes over the body of a man named Bruce and plans to find a way to prevent himself from dying. The Doctor meets Grace many hours later and tries to convince her that he's the same person she operated on in the hospital, but believing him is very hard due to his different appearance.

The Master enters the TARDIS and meets with a young man named Lee, who met The Doctor earlier and helped get him to the hospital before becoming curious about the TARDIS. The Master lies to Lee, claiming that The Doctor is a villain who stole his regenerations, which he is trying to get back from him.

While with Grace, The Doctor recovers his memories and declares that he is The Doctor while kissing the surgeon. But when The Master accesses the Eye of Harmony, he locates his nemesis right when the world starts facing some disturbances. New Year's Eve 1999 is under way and the beginning of a new century is about to happen, but the end of the world must be prevented.

The Doctor visits a New Year's Party and finds the necessary component -an atomic clock- needed for the TARDIS and gets to it while being pursued by The Master, but not before Grace gets infected by part of The Master during an encounter with him and knocks out the Doctor while doing his nemesis' bidding. The Doctor reawakens in the Eye of Harmony chamber, where The Master is ready to steal The Doctor's regenerations.

Lee speaks with The Doctor about what The Master told him, but The Doctor tells Lee that The Master is lying to him. "HE'S RUN OUT OF LIVES AND NOW HE WANTS TO STEAL MINE!" The Time Lord warns, the Master dismisses Lee and uses Grace to open the Eye of Harmony as only human DNA could apparently open it.

With everything set, The Master ascends to a platform opposite of The Doctor, who tells Grace to reroute the power in the TARDIS to close the Eye of Harmony before the end of the world happens and The Master steals The Doctor's regenerations. Grace leaves to the control room as The Master begins to absorb The Doctor's remaining regenerations, declaring, "I can feel your thoughts, Doctor. I can see your memories."

Grace reroutes the power and the TARDIS achieves temporal orbit, preventing the end of the world as the new year begins. The Doctor gets free from his bonds and scuffles with The Master, who falls into the Eye of Harmony by the end of the fight. Don't worry, he'll be back in eleven years. *Spoilers*

The Doctor joins Grace and Lee outside the TARDIS to witness the fireworks display unfolding, he then parts ways with them and the movie ends with the Eighth Doctor in the TARDIS leaving Earth as he goes back to reading a time travel book his predecessor was reading at the start of the movie while the record playing a song starts repeatedly saying "time" and The Doctor says, "Oh no, not again."

For a film meant to revive Doctor Who, this was very nicely done, despite being a failure. It managed to gain some interest in the Doctor Who brand and played its part in the (eventual) revival of the show over 9 years later. Paul McGann continues to play The Doctor in audio adventures and finally reprised his role onscreen in 2013 for a 50th Anniversary episode prequel known as "Night of The Doctor. This movie is worth watching and is a must see for anyone into Doctor Who, now I must bid you goodbye and Happy New Year. As of this post, we are nearing the end of the Doctor Who movie's anniversary year and 2022 is about to begin. Farewell, Whovians.