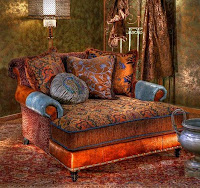 Happy New Year! Come on in, help yourself to a snack, a drink, find a comfy place to sit while we talk about books.  This year turned out differently than planned, but that's quite all right.  There's a quote I saw somewhere that said "Time is never wasted, it's just spent on something else." I was talking with another BAWer the other day and the thought crossed my mind, that we come to some books, when we are ready to appreciate and enjoy or learn from them. We can make all the plans we want, but it just may not be that book's time yet, and need to put it aside for another day until it is. Sometimes you'll know, other times, it will be a matter of trial and error, and maybe the third time will be the charm.  This year wasn't the year for some of my chunky wanna reads and I gave up, intending to still read them at some point.  So on to answering our wrap up questions for this year.

What were your reading goals:

To read more physical than ebooks - Failed. I lost track at some point and I'm not counting the Nora Rereads.

Read at least 12 non fiction - Failed with only three completed.

Read 10 books in 10 categories -  Win, win, and only had to change a couple categories.

In January decided to reread the books I currently own from Nora Robert's bibliography.  Win Win. Reread several series and spent a lot of time in Ireland.

Last but not least, finish Robert Jordan's Wheel of Time series. Win Win. Happily I did finish the Memory of Light, the last book in the series.  I don't know why it took me years to do so when I devoured the Outlander series a couple years ago in a matter of months.  I think it's because Jordan's series was a dense, intense, massive undertaking for the characters, it took time to absorb between each reading.  That's my theory and I'm sticking with it. LOL!  Maybe I'll binge read it one of these years when I have nothing else to read.  Ha Ha!

How many books did you read?  The official goal is 52 but usually read twice as many. 100 or so. Not really sure since I counted all the series as one book.

Did you explore outside the box, delve into new worlds or take comfort in the old.  Yes, definitely

Did you heed the call  of your dusty books calling your name, whispering read me, read me. Unfortunately I didn't heed the call this year. Soon, my darlings, soon

That's not creepy at all, is it? Only a bookworm would understand and listen.... *grin*

What was your most entertaining read of the year?  I think it is The Invisible Life of Addie LaRue by V.E. Schwab, a new to me author. Addie makes a deal, her soul to live forever, but didn't realize part of the deal was that no one would ever remember her. The moment she left someone's sight, they forgot who she was. Imagine waking up in the morning and the person she's with had no idea who she was.

The most entertaining series of the year is Darynda Jones Charley Davidson series  which was hilarious as well as charming about Charley who is the Grim Reaper and a part time investigator. The dead help her solve crimes and her knowledge makes the police might suspicious.  I binged the 13 book series within a couple weeks and will definitely be rereading.

Which stories stuck with you the longest:  The Starless Sea by Erin Morgenstern. It was beautifully written story within a story within a story and you never were quite sure which world was real. Also The Bear and the Nightingale by Katherine Arden. The story drew me in with its vivid imagery, and you can almost feel the bite of the freezing snow, and played on your emotions with plenty of love, fear, and anger, as well as evil and hope and magic.

Which characters did you fall in like or love with?  So many.  The Bridgeton clan in Julie Quinn's series and The Dove sisters in Karen Hawkins Dove Pond series.

Which stories or characters made you want to dive into their world and live there?  Ireland has always been a big draw and a mystical land and I would have loved to live in Talamh with the characters from Nora Roberts Dragon Heart Series.  And I'd love to live in the Library from Genevieve Cogman's Invisible Library series.

Which story surprised you: My Christmas Number One by Leonie Mack.  I was in the mood for a cozy romance and what I got instead was a poignant story about two characters, singers from different cultures, both affected by long term grief, brought together to create a Christmas song.

Which story made you reflect: Matt Haig's Midnight Library where the character was given a chance to try on another life to see if anyone of them was better than the one they had currently.

Which story made you laugh out loud:  Darynda Jones Charley Davidson series.

“After a long pause in which he took the time to blink several times, he asked, "You named your breasts?"

I turned my back to him with a shrug. "I named my ovaries, too, but they don't get out as much.”

Which story made you cry:  I had five hanky moments with several books including My Christmas Number one, Karen Hawkins A Cup of Silver Linings, Also The Little Paris Bookshop by Nina George.

"What task do the departed want us to do?

"To carry them within us-that is our task. We carry them all inside us, all our dead and shattered loves.  Only they make us whole. If we begin to forget or cast aside those we've lost, then..then we are no longer present either.  All the love, all the dead, all the people we've known. They are the rivers that feed our sea of souls. If we refuse to remember them, that sea will dry up too."

Which story irritated the heck out of you?  Charlaine Harris Real Murders, the first book in her Aurora Teagarden series. I couldn't make up my mind whether I disliked Aurora or the writing which drove me crazy with all the telling vs showing. There were several times I almost quit reading because Aurora annoyed me, but liked the premise and didn't have a clue who committed the murder, so was pleasantly surprised.

Which story made you want to keep reading?  I immersed myself in Jennifer Armentrout's world in the Blood and Ash series.  Really fat books at 600 some odd pages each full of vampires, wolves, gods, deities, royalty and magic.  And of course, hot sex.  #1 From Blood and Ash, #2 A Kingdom of Flesh and Fire, and #3 The Crown of Gilded Bones which are all so very good. But damn, it ended in a cliff hanger and now I have to wait until the next book comes out in a year or so probably. I really hate that.

Which stories inspired web wonderings and lead you on rabbit trails? The Sworn Virgin by  Kristopher Dukes. I had to find out if there really was such a practice

Which stories would you read again and again?  So many, I can't narrow it down to just a few.

One book you think everyone should read?  The Starless Sea by Erin Morgenstern.

Where in the world and through what time periods did your reading adventures take you? Outer space, Victorian era, England, Russia, Ireland, Albania, France, South America.

All in all, now that I've reviewed the year, I'd have to say it was a very good reading year. I discovered some great authors and read some very interesting series.

~Cheers to a wonderful reading new year and new adventures.