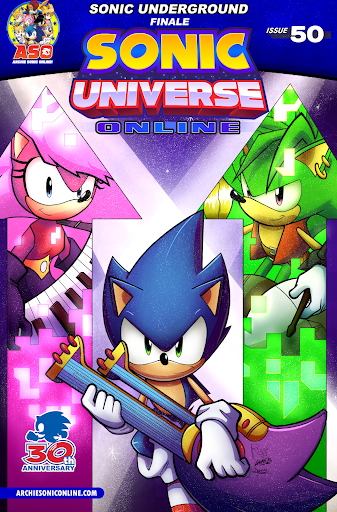 Remember that 40-episode Sonic cartoon from back in 1999, made by DIC, and was about Sonic with siblings and had musicals. Guess what? After years of waiting, we finally have just gotten a proper conclusion to the show in comic form, made by fans anyway.

Having just read the whole thing, what do I think of it?

That story WAS AWESOME! The crew did a great job, they wrapped up the story without an issue.

Sonic and his family were characterized sweetly and the story was a treat to read, it had some action moments and a heartwarming reunion with the queen. At one point, after I read the story, I almost teared up before I posted this review. But either way, we got what we wanted, even if it wasn't delivered by the generous people at SEGA.

Robotnik's defeat was very well written, I was nearly hoping he'd be killed off, but they roboticized him and turned him into a good guy instead. Now that the story of Sonic Underground is done, where do we go from here? Its likely we might get more Underground stories in the future, if ASO wants to revisit that world anyway.

If that wasn't enough, guess what, ASO actually interviewed Ian Flynn. Y'know how Ian Flynn wants to stay away from fan stuff, looks like he made an exception to talk with the ASO folks. Holy sh*t, this is f***ing crazy! I LOVE SONIC!

Did I have a favorite moment from it?

Robotnik's defeat, thats all I have to say.

Fanboy craze out of the way, my score for this is a solid 9.5 out of 10. If you want, go ahead and rewatch the Sonic Underground show in its entirety and then read/reread the epilogue online. The Sonic franchise and its fandom is the best, may Sonic keep going and may the fans keep the spirits of forgotten characters alive until the day they eventually return at long last.

In the meantime, lets go enjoy some Modern Sonic content from SEGA.