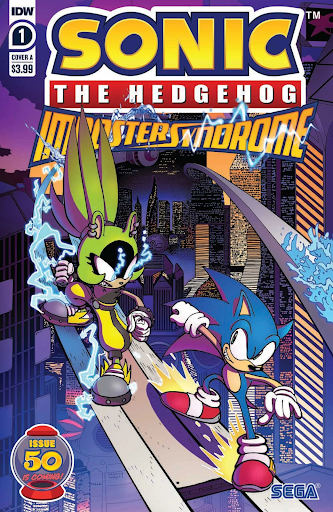 Imposter Syndrome is here and we got new characters: Surge and Kit.

Who's Surge and Kit?

They're new characters, sort of. Surge is basically the spiritual successor to lost Archie Sonic character Scourge the Hedgehog, but unlike Scourge, Surge is made by Ian Flynn and is owned by SEGA (hopefully). What's the issue about? Doctor Starline preparing for Project Remaster, a plan that involves getting rid of Eggman (like thats ever gonna happen) and paving the way for something new. To prepare, he tests Surge the Tenrec and Kit the Fennec, who are kinda stubborn and rebellious at times.

Another good and harmlessly fun IDW Sonic comic issue, very good read. Ian Flynn's writing just got more impressive with another story penned by him, he did a good job without being held back. In fact, you may as well say SEGA's doing a good job with the storytelling too. Looking forward to the rest of the miniseries and the epic IDW Sonic issue 50 assuming it is epic in anyway.

My score is an eight, it was acceptably fun.