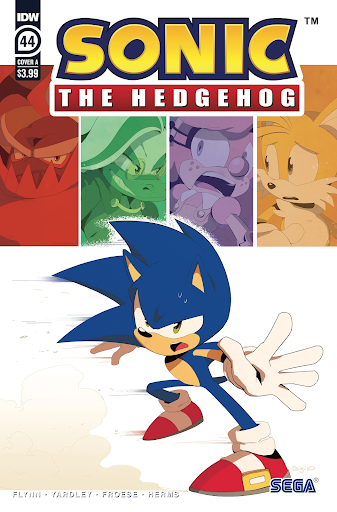 The Zeti Hunt is over and the Deadly Six have returned to the Lost Hex until further notice. Hi folks, James M here and I'm back with a little review of IDW Sonic issue 44. As you probably know by now, we've reached the finale of the Zeti Hunt arc and a Metal Virus plot thread had been wrapped up.

Ian Flynn did a phenomenal job with cleaning up after himself, besides, who wants the Zeti to be hanging around on Sonic's home planet after what happened near the end of the Zombot saga. Meanwhile, we learned more about Belle's past with Mr. Tinker aka amnesia Eggman while the puppet bot girl is being held hostage by Doctor Starline.

The Chaotix rescue her, but its too late as Starline got some data from Belle and is about to use them in a project that will be seen in issues to come. So, what now? We'll be finding out soon, very soon. It looks like IDW Sonic's momentum is not slowing down and Sonic is riding high this year and will continue to ride high for years to come. Anyways, hope you have fun out there...