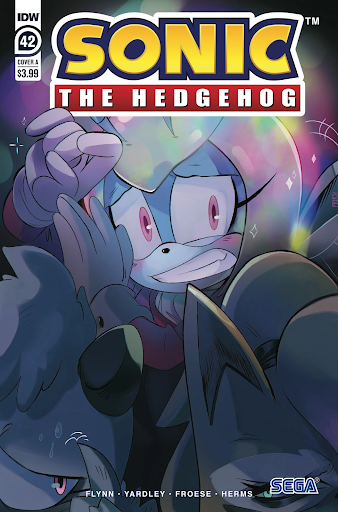 Welcome back, fans. Its IDW Sonic time again and, after adventuring into the Classic Sonic timeline, we're journeying back into the main timeline with issue 42 that serves as part two of Zeti Hunt.
This one was intense and epic, the Zeti attacked Resistance HQ and Doctor Starline returned... to kidnap Belle.
That's right, baby. Doctor Starline's back and he kidnapped Belle, mostly due to the fact he never forgot her after the events of the Chao Races and Badnik Bases arc written by Evan Stanley. Nice to see Ian start to build off what Evan established between his departure and return. Its so cool to build on something established in a comic that often builds off what the Sonic games have established despite its non-canon status.
Ian and his crew did an excellent job with this issue and there were a few cool Easter Eggs throughout, can't name them all, but there was a Star Fox Easter Egg in Tails' Central City workshop. The characterizations were beautiful and the writing team pulled no punches, it was intriguing to see Starline be shocked to learn that Zavok was still alive after the Bad Guys miniseries.
C'mon, you can't kill off a licensed character unless you have necessary permission and I'd be shocked too if I found out that someone I thought was dead was still alive. Can't keep a good villain down, am I right? Also, seeing Tangle and Whisper is very sweet, they are great characters and so is Jewel the Beetle. This issue was full of great moments and story scenes that will never be forgotten.
My score for IDW Sonic issue 42 is a 9.5 out of 10.
See you in issue 43, folks!
at July 21, 2021