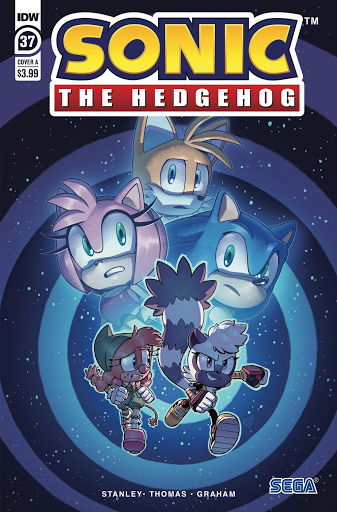 Welcome back to IDW Sonic world, folks. Year Three is behind us and now its time for YEAR FOUR, starting with issue 37 and a brand new arc written by Evan Stanley, fresh off from CHAO RACES AND BADNIK BASES! I'll say this, folks. Since we're in 2021 and with Sonic's 30th Anniversary looming, the future is bright for the franchise and the comics have a promising future too...

So, what's the new arc about? Well, Evan did give us a bit of info a couple months back that there would be a storyline where Sonic, Amy and Tails go explore a strange tower set up by Eggman while Tangle and newcomer Belle help out the heroes from behind the scenes. So far, the story has gotten off to a fairly good start and Evan is going all out with this one with no SEGA mandates to stop her.

How are there no SEGA mandates that serve as road-bumps for Evan here, you ask? Well, she's working with characters who are easy to write and Shadow isn't here right now. Huzzah, by not including Shadow in almost everything, the writers are free to write certain characters without being bogged down by tight restrictions as long as they don't do anything that SEGA doesn't approve of.

I'll say this, Evan is great with characterization and character interactions just as Ian is. Well, no big friggin' duh, every writer has done their best to be great with character interactions and characterization despite a few hiccups in the road depending on the situation. Sonic, Amy and Tails have a great dynamic just as Tangle and Belle are getting along well and their dynamic is sweet too.

After reading this issue the day I got it and after thinking about it for a while, I will say that IDW Sonic issue 37 is without a doubt the best issue in the comic series. And so, I strongly give this issue a 9/10 like almost every other issue. May IDW Sonic be strong next to Archie Sonic, also, I think its time for SEGA to ease up on its grip on the comic and lift certain mandates. They've been playing it safe long enough, let the comic cut loose and go all out. Have a good day, folks!