Bookish Notes: To Sleep in a Sea of Stars by Christopher Paolini 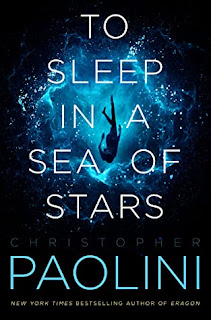 I started off listening To Sleep in a Sea of Stars on audiobook in the car, but soon couldn’t stand waiting for the next car trip to find out what happened next, so ended up buying the book.  Now that I’ve finished the hardcopy, I can enjoy listening in the car, listening at a slower pace, familiar with the story, and not having to click back 30 seconds because I missed something.

I had to recover from a book hangover before I could put my thoughts together on this story.  A space opera that I imagine mirrors long sea cruises in which there are many long days, with nothing to do but sleep and eat and talk and think, mixed in with shore excursions where one tries to fit in everything they can in a day, then off to another port of call.  It’s every thing I imagine how space travel would be.

At the center of it all is Cara, a xenobiologist, who discovers an ancient relic, the Soft Blade.   A sentient alien, the last of her kind, who melds with Cara as a living skin suit.  Then mix in two different alien groups out to conquer the world and want the Soft Blade,  and the shore excursions become space battles and a race to save the universe.  Between the space battles are period when the crew hibernates in cryosleep, except for Cara because the Soft Blade has made her resistant to it.

During those periods of time in which it seem to take forever and a day,  Cara and the Soft Blade must figure out how to communicate and work together.   I totally enjoyed the story, the world building, the characters and the relationships building among all of them.  Amazing and entertaining story and really appreciate Paolini’s creativity.

Synopsis:  During a routine survey mission on an uncolonized planet, Kira finds an alien relic. At first she's delighted, but elation turns to terror when the ancient dust around her begins to move. As war erupts among the stars, Kira is launched into a galaxy-spanning odyssey of discovery and transformation. First contact isn't at all what she imagined, and events push her to the very limits of what it means to be human. While Kira faces her own horrors, Earth and its colonies stand upon the brink of annihilation. Now, Kira might be humanity's greatest and final hope
(Category:  Alternate Realities)
at February 21, 2021