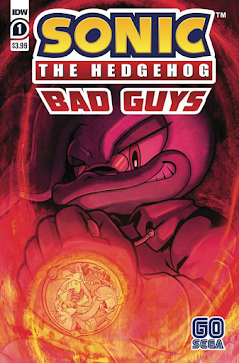 Hey folks, after months of waiting, its time to dive into the dark side of the Sonic universe with a story focusing on Doctor Starline and a few rogues in the world of IDW Sonic with issue one of the miniseries SONIC THE HEDGEHOG BAD GUYS!
As you know, Doctor Starline is a comic exclusive character and a villain, he first debuted in issue 11 during year one around the same time as the Battle For Angel Island and he became Doctor Eggman's lackey after Eggman got his memories back. He stuck around during the Metal Virus arc and soon got booted out by the doctor after the Deadly Six hijacked the plot. So what's Starline up to?
We start off the story with Starline snooping around an Eggman base and trying to access the Eggnet, this doesn't go well since he gets locked out and attacked by Eggman's robots, prompting him to use a new power in his shoes to destroy the incoming Moto Bugs. He later returns to the Eggman base that he's set up shop in and struggles to come up with an idea on what to do, until he gets an idea.
Starline visits a prison, specifically, the prison where bad guys are being held. Its one of the most secure of all prison facilities on, well, Mobius. Yes, I'm gonna call Sonic's world Mobius because I like Mobius and I HATE SEGA'S MANDATE OF SONIC'S WORLD CANNOT BE CALLED MOBIUS! Anyways, after tricking the warden of the prison, Starline finds the first person he's looking for. The first person he finds is none other than our old friend Mimic from the Tangle & Whisper series.
Oh and by the way, not only are Rough & Tumble here, but Zavok's here too. Starline attempts to recruit them, but they're not interested. He does managed to persuade them and, so, the "Deadly Four" is born. Starline's allies begin their prison break out and chaos soon ensues with the guards trying to stop them only to get taken out either by brute force or by trickery.
Starline commends Zavok for being a visionary and as the issue ends, the former lackey of Eggman declares that with the warm up done, its time they get started with doing some real damage.
My thoughts on this?
So cool. Guess it doesn't hurt to be a bad guy sometimes in fiction, I love me some fictional bad guys even though I like good guys and being good is good. We've seen a few bad guy centric stories in Sonic before, Scrambled and Eggman's Dozen in Sonic Universe being prime examples of stories focusing on the bad guys of Sonic's world.
Lets wait and see what happens with the next few issues next time folks.
-James M