Salutations Archie Sonic fans, James M the CrazyGamerHistorian here, and today we will be looking at the long awaited proper conclusion to the Mecha Sally arc:, Archie Sonic the Hedgehog Online Issue 250. So, without delay, let's do it too it... 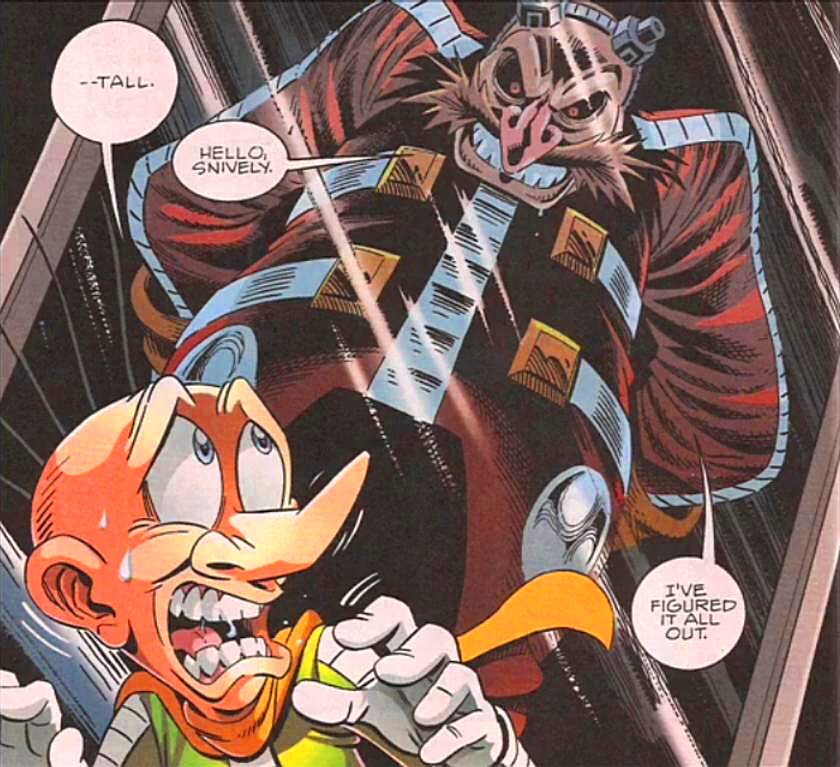 So here's the story so far, in terms of the official Archie Sonic storyline and the fan comic...
Not very long ago, Sonic once again defeated the evil Doctor Eggman, causing him to lose his sanity and paving the way for the Iron Dominion led by the Iron Queen to take over the Eggman Empire. But the doctor's insanity did not last long. During the final battle between the Freedom Fighters and the Iron Dominion, Eggman regained his sanity, believing he figured out how Sonic could be defeated. Retreating into the shadows, the mad doctor completed his project, which was a second Death Egg, which he launched before unleashing the Genesis Wave upon Mobius.

As the world turned white and the universe was reset, Sonic was in the midst of battling a new version of Silver Sonic and became stricken with grief and anguish when he saw Sally Acorn shot down by Eggman's gun turrets in a corridor. However, things would soon change, for better and for worse. Sally's demise was short lived as the Genesis Wave brought her back to life in a whole new world Sonic and friends found themselves in. Memories of the old world resurfaced and Sonic challenged Doctor Eggman aboard the Death Egg II as the mad doctor prepared to fire off a world roboticizer. In the end, Sonic defeated Eggman and, using Chaos Control, the old reality was restored. 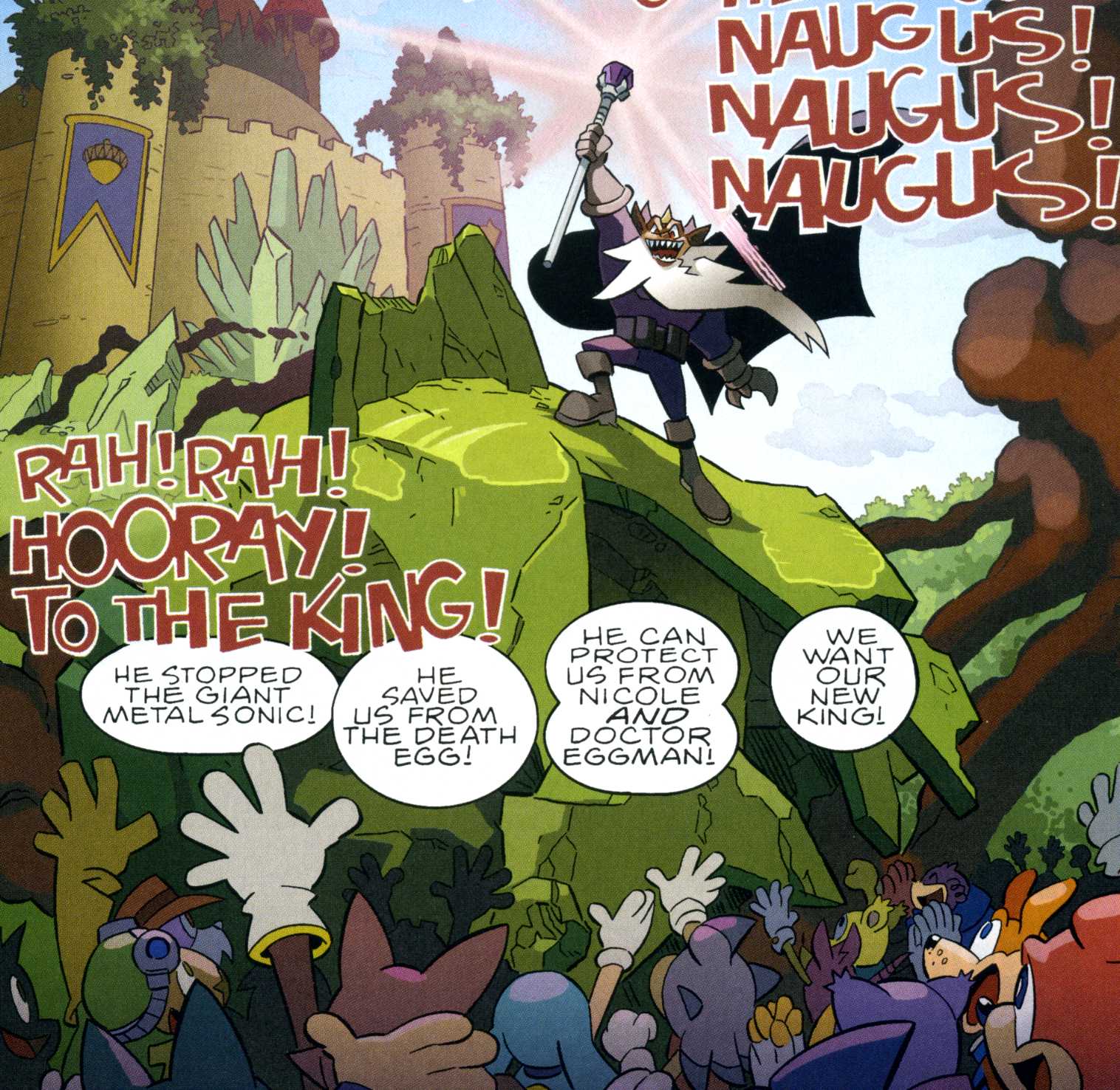 As he carried out the task of restoring the old universe, Sonic turned back the clock just enough so he could save Sally before she was gunned down by Eggman's machines. Together they thwarted the mad doctor's ultimate scheme to roboticize the entire planet and destroyed his world roboticizer, but all that came at a price as Sally was turned into a robot and became Eggman's robotic slave. Amidst the chaos of the battle to save New Mobotroplis from Titan Metal Sonic, Bunnie Rabbot found her own roboticized limbs accidentally crystallized by the evil Ixis Naugus who saved the city and became king, much to the horror of Sonic and his friends. 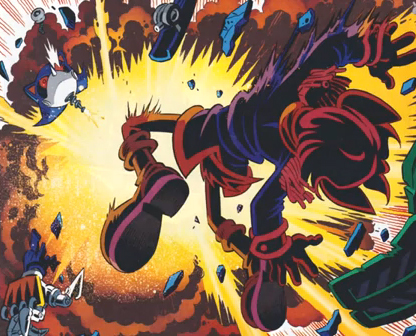 Everything went further south for Sonic not too long after when Bunnie was restored to full flesh and blood, losing her robotic self, and when Antone was badly hurt by an exploding Metal Sonic during another Eggman battle and ended up in a coma, which caused Bunnie to leave the team. The Freedom Fighters seemed to be done for and there wasn't much hope left for Mobius, not helped by the fact that the Kingdom of Acorn was under the vile reign of Ixis Naugus. However, even in the darkest of times, there was hope. Sonic gathered Amy and Tails, putting together Team Fighters and, together, they traveled the globe, chasing down Doctor Eggman in order to protect Mobius and save Sally. 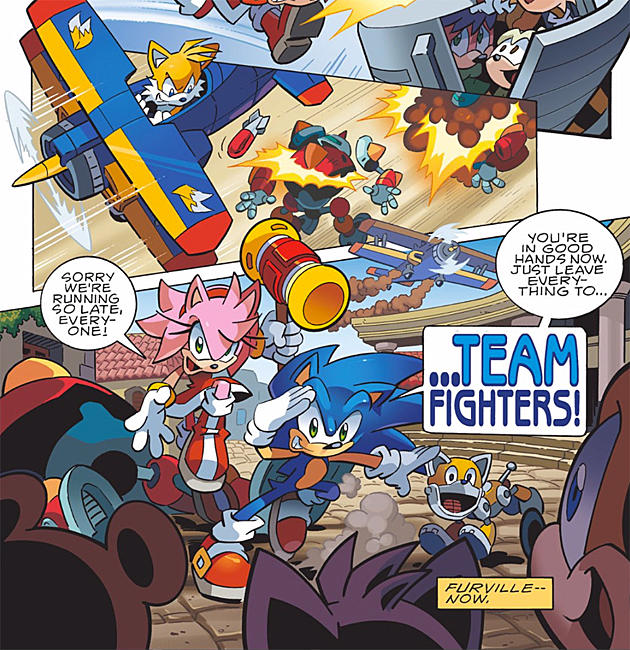 Sonic and his companions adventures and battles with dark forces lead them from the streets of Furvill to the Cat Country in Soumerica to the Mercian coast to the Echidna City of Albion, where they helped Knuckles fight to save his people from near extinction, all the way to the icy and frosty plains of the arctic where they finally had Doctor Eggman cornered as the mad doctor repaired his Death Egg. Sonic's goal -finally save Sally Acorn from the mad doctor's clutches. 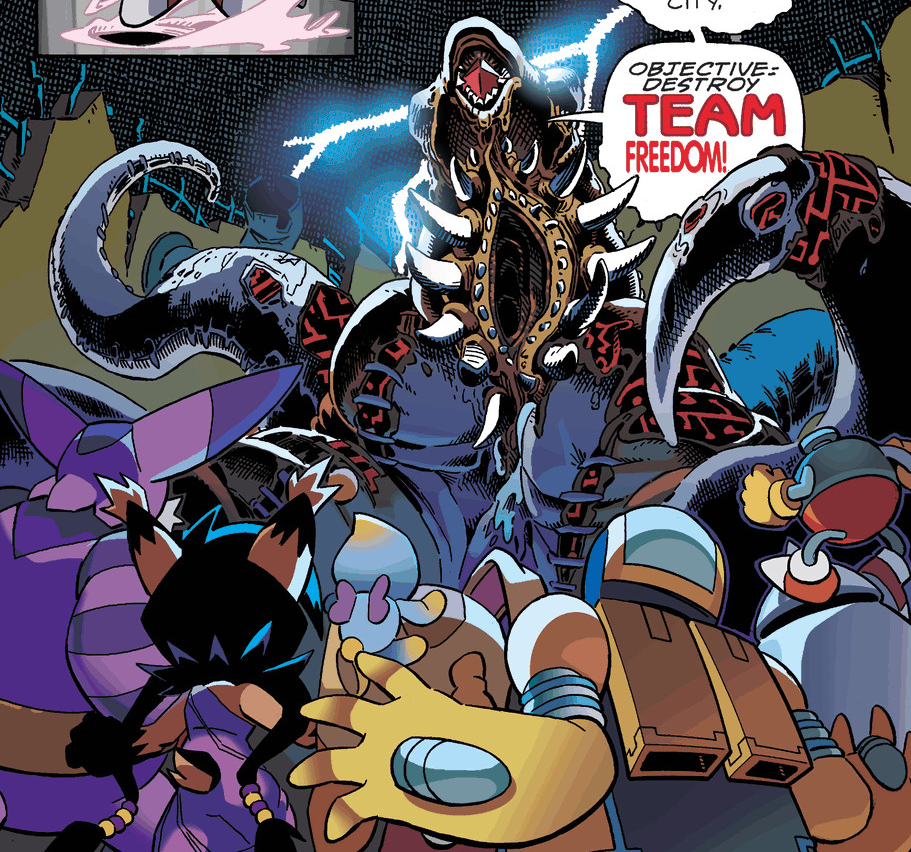 Meanwhile, back home in New Mobotroplis, Rotor led Team Freedom in defending the city from inside and outside threats. The biggest internal threat of all -Tails Doll, which wrecked havoc, disrupting the nanites and trying to ruin the whole city. Rotor's team caught wind of what was going on and confronted the robotic duplicate of Tails, which proceeded to transform into a monster as it prepared to battle the heroes. Back in the arctic, Sonic and company were joined by Silver the Hedgehog as they tracked down Sally Acorn. But just when victory was in their hands, the Genesis Wave went off again and, this time, it affected another world alongside Sonic's.

This lead to his team up with the super fighting robot Mega Man as they fought to thwart Eggman and Doctor Wily's plot to control all of reality. The battles were intense but in the end, Eggman and Wily were defeated but the Super Genesis Wave had activated and threatened to permanently alter the whole multiverse. Despite Eggman's efforts to hinder the heroes, Sonic and Mega Man successfully restored both worlds back to normal.

As the universe was once again restored to normal, Sonic and friends resumed their mission to rescue Sally and, after a hard fought struggle, they managed to get the roboticized princess back to the Tornado and took off, heading back to New Mobotroplis, but not before Eggman sent out Metal Sonic and the newly activated Emerl to confront Sonic and retrieve Mecha Sally. At that same time, Team Freedom fought Tails Doll and in the end, they eventually beat the monstrosity and disabled it.

Arriving back home, Sonic and friends were confronted by Metal Sonic, Emerl and, even worse, a reactivated Mecha Sally, who attacked Sonic and activated a self-destruct mechanism built in her.
However, in the end, Metal Sonic and Emerl were defeated while Sonic quickly got Sally to a de-roboticizer built by Uncle Chuck and Tails. When the dust settled and the machine had done its part, Sally Acorn was restored to normal and Sonic's mission was complete...

The main story begins with Sonic, his friends and family escorting the deroboticized Sally out of the lab where everybody in New Mobotropolis outside is waiting to celebrate the return of the princess, there's happiness everywhere and nothing that can ruin it all. However, what about Ixis Naugus, who still possesses his own apprentice Geoffrey St. John? Well, it turns out, despite his best attempts, Naugus is still suffering from hideous mutations and being taunted by the spirits of his past selves. Nicole comes to check on Naugus/Geoffrey, who shoos her away quickly.

Meanwhile, at Sonic's place, Sally is traumatized and grief-stricken over what she did as Mecha Sally, despite Sonic's efforts to comfort her. Seeing her father, Max, and her mom, Alicia, makes Sally feel a bit better. The Acorns are a happy family again, even though Elias is absent given what he's doing with Harvey Who's Secret Freedom Fighters. Later, at the New Mobotroplis Coliseum as the gang gets ready for a celebration concert, Sally has a sweet reunion with Nicole, Cream and Mina, and learning that Mina and Nicole are good friends now, makes her happier.

However, the happy mood shifts to suspenseful when Naugus/Geoffrey shows up and talks with Sally, welcoming her back. Sonic talks with the possessed skunk, asking him why he's been acting weird all of a sudden. As Sonic departs, after making Ixis/Skunk boy a bit mad, he brings up Hershey, Geoffrey's wife, which depresses the real Geoffrey just a little bit, thus ending the main story.

On The Backburner/Birds of a Feather:

On the Death Egg, Eggman, who is enraged over recent events, is trying to make repairs and starts to lose his sanity again before making contact with the D.E.L chapters, asking them for assistance, and then begins working on a new project and plans to keep harassing Sonic. Man, Eggman's not taking his loses very well, sooner or later he's gonna lose his sanity again just like before. Meanwhile, Sally is visited by Knuckles, who came over to see her after hearing the recent news and the two have a chat with Knuckles kind of comparing the Mecha Sally ordeal to the events of the Enerjak arc.

You know Knuckles, the Enerjak Arc involved you turning into a crazy demigod thanks to Doctor Finetivus while the Mecha Sally arc involved Sally being roboticized and Eggman using her. These events cannot be compared, I'm sorry. Anyway, Knuckles tells Sally to call him up anytime and they hug, ending the back up story and the issue.

Thoughts/Conclusion:
This entry in the Archie Sonic Online comics was incredible and worth the wait, I enjoyed reading it and this basically might be my favorite now.  The long awaited proper conclusion of the Mecha Sally arc has now arrived and seeing what could have been for the official comic book was incredible. The art is amazing, the writers did a great job and I love the visuals and the stories too. I cannot wait for more Archie Sonic Online goodness coming very soon, including the Sonic Underground epilogue in the pages of Sonic Universe Online. Also, I finally got myself a Sonic Grams letter into the pages of Archie Sonic at long last after years of trying, woohoo!