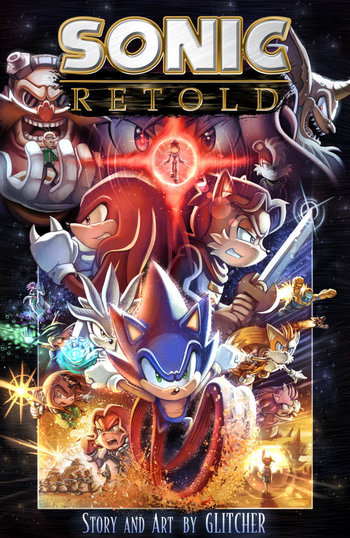 Salutations people and today we're looking at another fan-made continuation of the pre-reboot Archie Sonic timeline known as... SONIC RETOLD!
Given that I review fanmade stuff sometimes, you think I would ignore this after I reviewed Archie Sonic Online a little bit. No way, Jose. I'm reviewing this. Why? I read it all, all of the first couple chapters. Anyways, let's get on with it.

As you may already know, after a legal battle between Archie and a former writer that had been going on for a few years, the Archie Sonic comics rebooted and 20 years of incredible and maybe not so incredible stories were trashed in favor of a new timeline that was in line with the games. However, a ton of people were not too happy and a handful have taken it upon themselves to give the old pre-reboot continuity of Archie Sonic a proper continuation and send off. The folks at Archie Sonic Online have been doing a fine job, but there is one group in particular that has been doing a fanmade continuation of pre-SGW Archie Sonic long before. The group in question? Well, its actually a dude who goes by the name of GLITCHER! 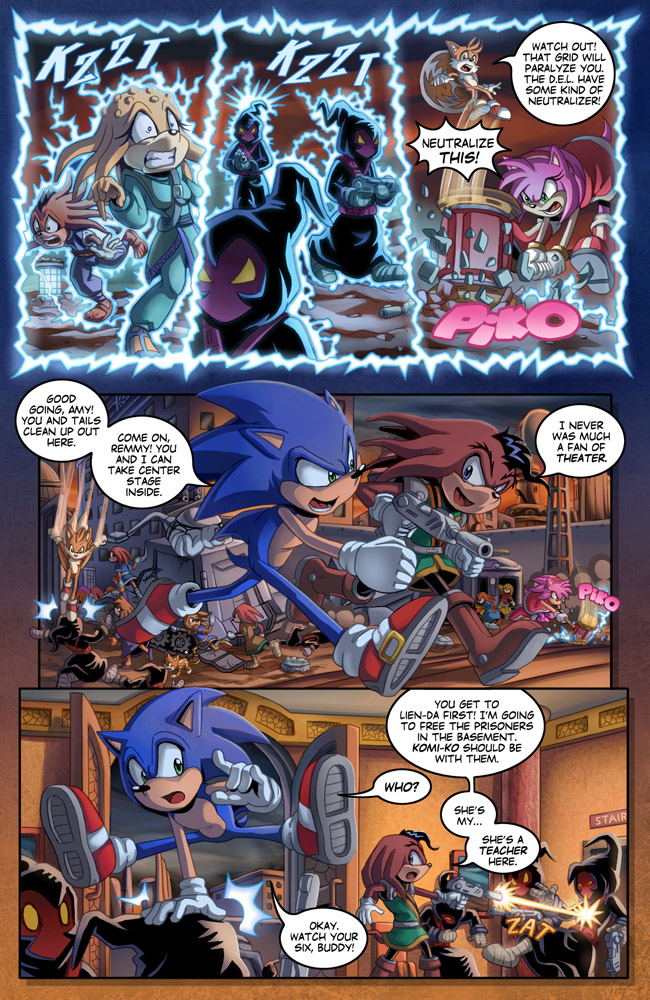 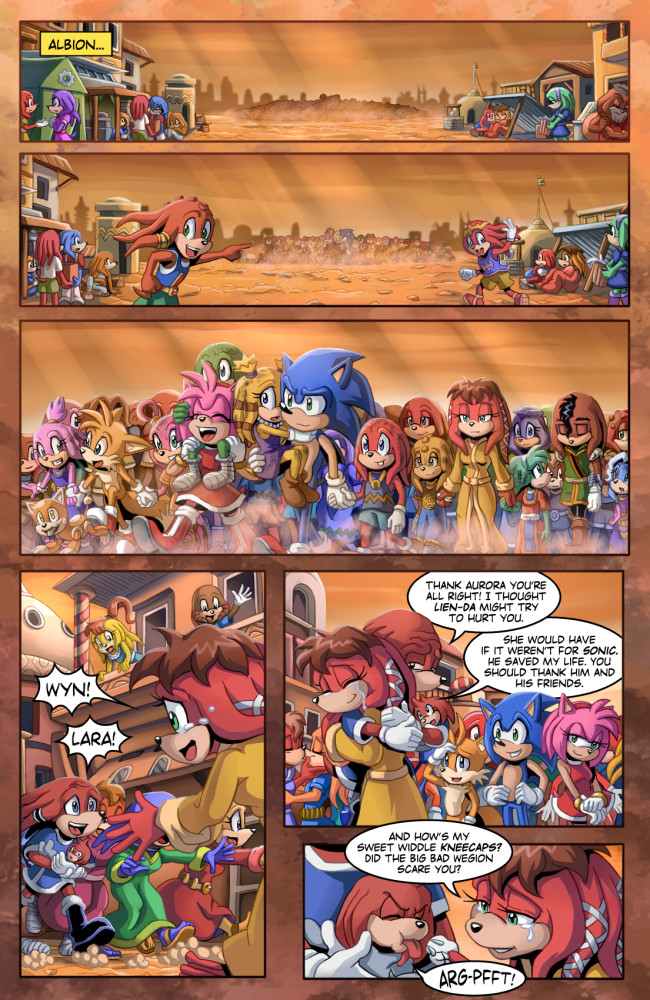 So, how does SONIC RETOLD play out? Well, it starts with the events of Sonic #243 and the Endangered Species arc and completely rewrites it all, no Thrash showing up to ruin everything and no dealing with the Krudzu Hybrid Hydra this time. Sonic and his friends save most of the echidnas in Albion and mostly drive out the Dark Egg Legion before they continue on with their mission to save Sally Acorn, whom Sonic soon has bad dreams about from time to time. In New Mobotroplis, on the homefront, Team Freedom deals with the Tails Doll as usual and there's still the whole Ixis Naugus and Geoffery St John plot that was going on before the reboot happened. 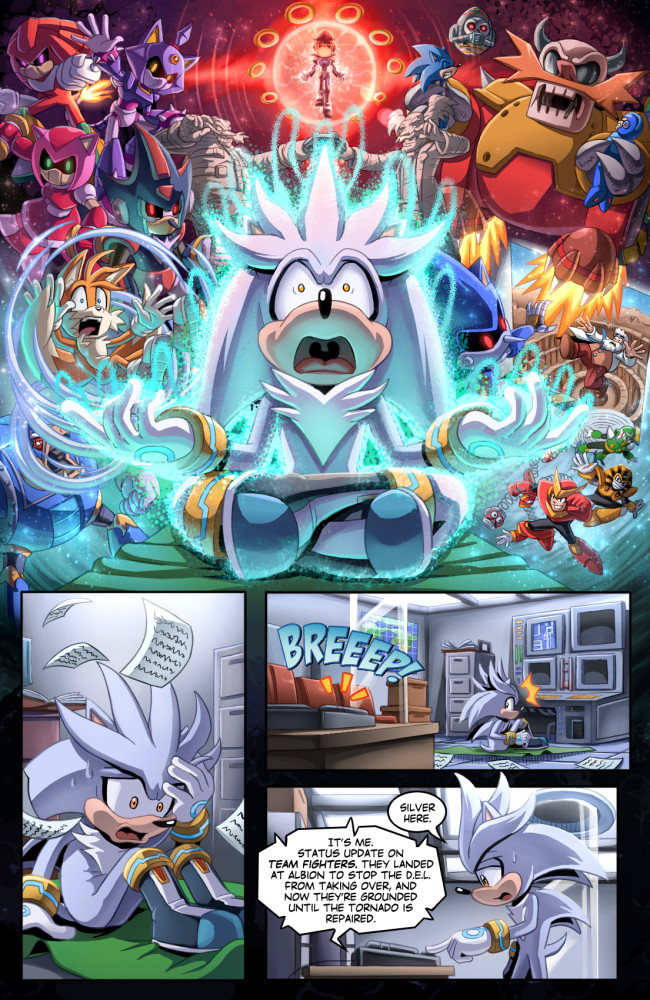 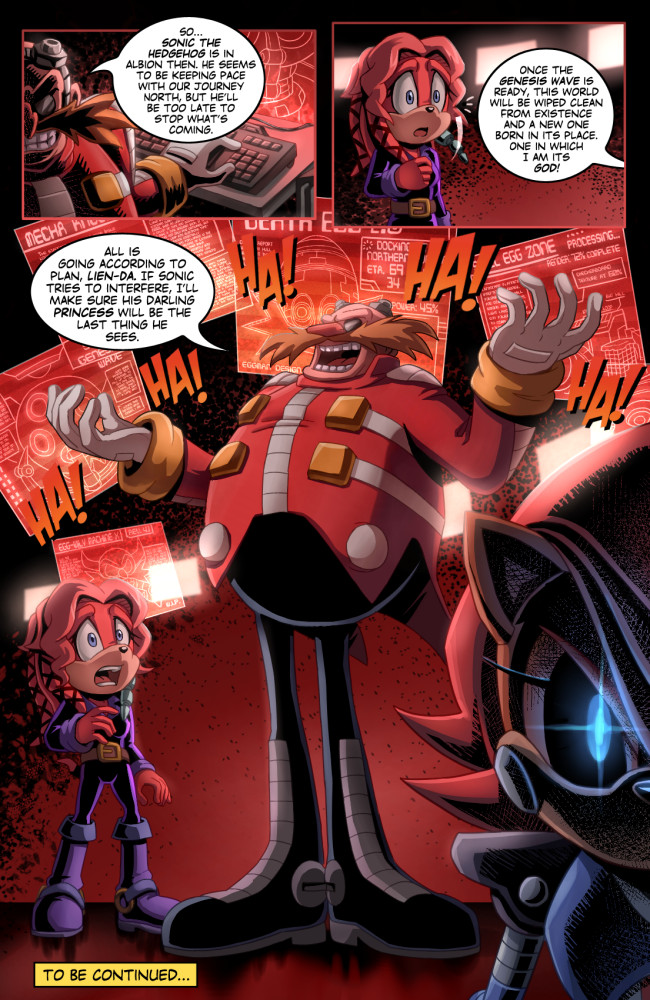 The fan comic does make a nod to the Worlds Collide Sonic & Mega Man 2013 crossover that lead to the reboot, this hints the crossover will happen at some point in the future but not right away. How does the nod happen? Silver is meditating and communicating with Mammoth Mogul's future self through the veil of time and gets a vision of events to come such as the aforementioned crossover. Even Eggman has plans to unleash the Genesis Wave again. Heck, at the end of issue one of this series, Eggman talks with Lein-Da (the hot and shapely echidna grandmaster chick) and cackles evilly as he says, "So Sonic is making his way north here. It won't matter, once I unleash the Genesis Wave, this world will be wiped from existence and a new one will be born in its place which I will be its ruler. The last thing Sonic will ever see will be his princess. HA HA HA HA HA HA HA HA!"

Glitcher does a fine job with the writing and the artwork, not to mention the tone of the story as there are times where it can be really light-hearted and family-friendly and then can be super dark on the same level as Sonic SatAM and most of the later Archie Sonic comics whenever the situation gets dark or we get a bit of a nightmare fuel body horror episode. For example, we actually see Eggman tear Mecha Sally apart just so he can upgrade her. What happens to most of her torn off robot body? Eggman incinerates it. While this comic/fanfic is enjoyable, it's almost nothing compared to Archie Sonic Online or other fanworks such as Sonic Travels to Jurassic Park the fan film or SonikkuFan94's fan comic Sonic Nova Unexpected Baby.

My thoughts on the fan comic that is currently on hiatus?
It's... really good. There may be issues with it that I cannot name, but overall, it's worth your time so go on Deviantart and read it all, this comic is full of hilarious moments, cringe-worthy scenes and some amazing action pieces from time to time.

The whole thing... gets a 9/10.
Overall, a fun read for anyone who loves comics, books, and Sonic, even if the works are fanmade.
Thank you for joining me as I review this piece of Sonic history in the fanbase.
Peace out!
-James M.
at December 11, 2019