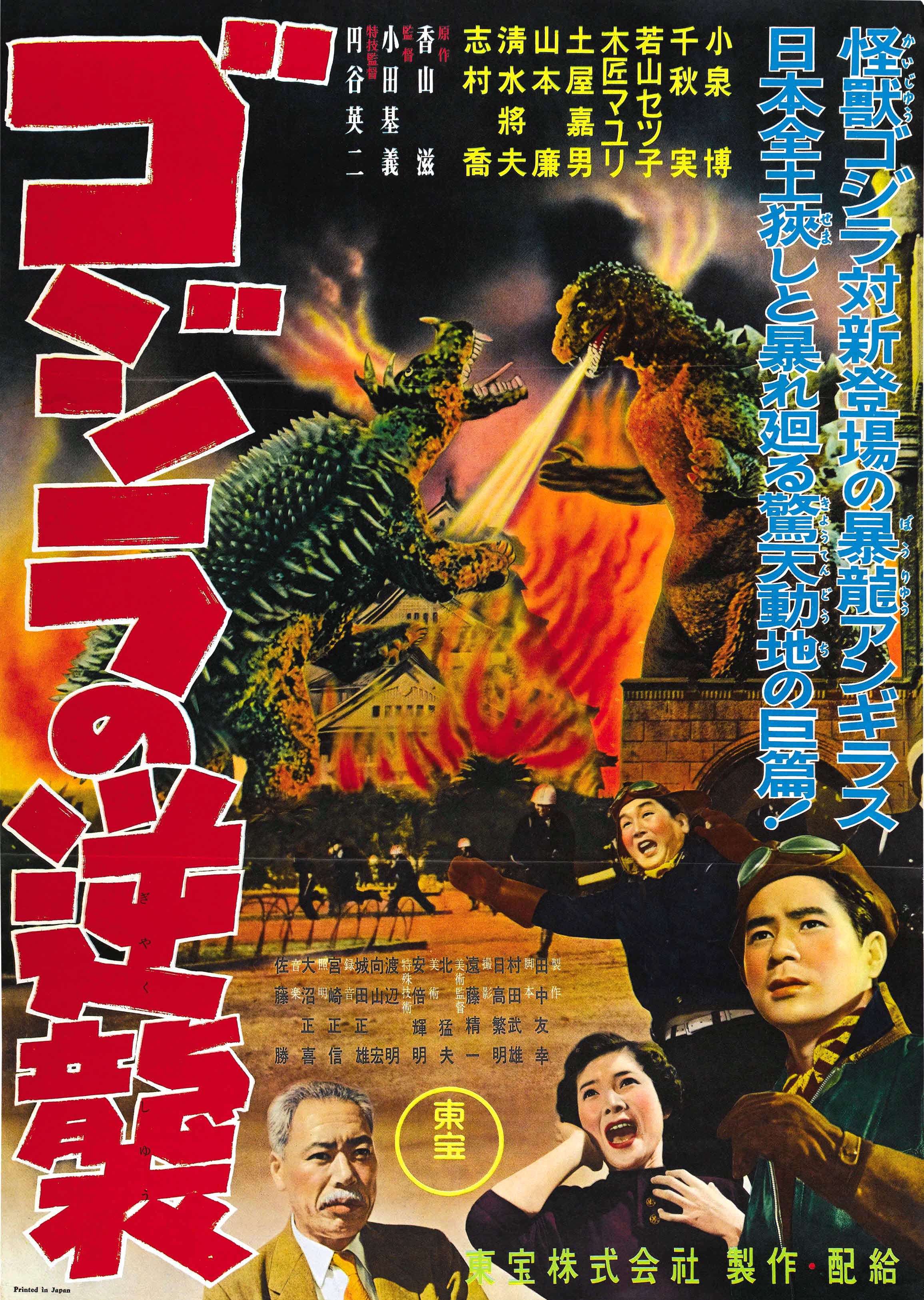 Hey, Godzilla fans, the time has come to look at the film that really got the ball rolling for the Godzilla franchise one year after the original's release, GODZILLA RAIDS AGAIN!
With the success of Gojira, Toho began working on a sequel and it released within nearly a year of the first movie's release, this movie changed the Godzilla formula forever, for better or for worse.
So why don't we go over the plot, eh?

Plot:
The story picks up just months after the events of the first movie with a pilot named Tsukioka out looking for fish in his plane when he has to go help his fellow pilot Kobayashi who crashed on a nearby island. The two pilots talk and laugh while camping out on the island until... 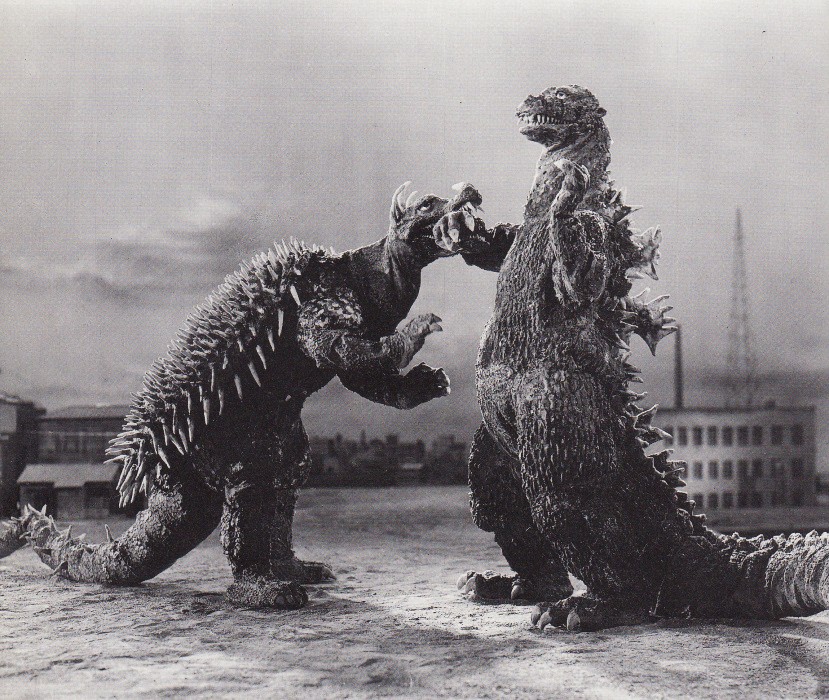 "GRRRYYAAAOOOOOOOOOOOOOOONNGK!"
That's right, Godzilla's back, but it's not the same Godzilla from the first movie as this one is a creature that is obviously of a different member of Godzilla's family. Doc Yamane's warning from the end of the first movie has come true, nuclear tests continued and we now have another Godzilla. But this time, Godzilla's not alone as he's engaged in battle with Anguirus, an ankylosaur from the same prehistoric era as Godzilla that mutated due to nuclear testing.

Tsukioka and Kobayashi hide to avoid getting crushed by the monsters and only come out of hiding after Godzilla and Anguirus fall into the ocean. The pilots head back to Osaka where they report the situation to the authorities and Doctor Yamane, before trying to come up with a plan to stop the beasts. It's not long before Godzilla comes ashore in Osaka, Anguirus soon arrives and the two battle again. The clash of the Kaiju actually decimates Osaka, the monsters smashing buildings left and right as Godzilla mostly uses his atomic breath and actually lights most of the surrounding area in flames. After a long fight, Godzilla defeats Anguirus and actually lights his corpse on fire with his heat ray after injuring the ankylosaur by biting his throat, ouch.

With Osaka in ruins, people begin recovering and move to Hokkaido before they start figuring out a way to defeat Godzilla. While out doing his usual fishing deal, Tsukioka spots Godzilla making landfall on an ice-covered island and reports back to base while Kobayashi keeps an eye on Godzilla before the air force arrives to bomb the beast. While dive-bombing the king of the monsters, Kobayashi gets shot down by Godzilla and his plane crashes into a snow-covered mountain, causing an avalanche to fall upon Godzilla, giving the Japanese the idea of burying the beast in ice. You think a ton of snow is gonna be enough to actually destroy Godzilla? He will be back, mark my words in about, oh, 7 years. *COUGH COUGH* King Kong vs Godzilla *Cough cough*

Anyways, the Japanese armed forces get to work soon enough, the planes bomb the mountain enough to make an avalanche start to burry the King of the Monsters. As the snow engulfs Godzilla, he lets out that roar from the end of the first movie. You know, the "AHRRRRAHHHHHHHRRRRRAAAAHHHHRRRRRRAHHRRAHR!" He tries to use his nuclear breath, but it's not enough as the snow finally buries him, thus making the operation a success. The movie ends with a view of the island while Tsukioka says tells his fallen friend, "We have defeated Godzilla."

Thoughts:
Godzilla Raids Again is not a bad movie despite not being a success at the box office and among critics when it first dropped in 1955. It actually is quite good, even the American version is still good.
Anyways, see you all next time, people!
-JMM
at December 13, 2019