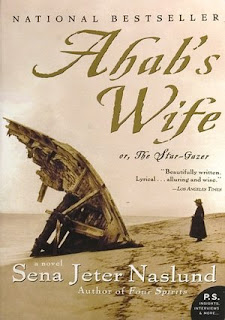 "Captain Ahab was neither my first husband nor my last. Yet, looking up—into the clouds—I conjure him there: his gray-white hair; his gathered brow; and the zaggy mark; I saw it when lying with him by candlelight and, also, taking our bliss on the sunny moor among curly-cup gumweed and lamb's ear. I see a zaggy shadow in the rifting clouds. That mark started like lightning at Ahab's temple and ran not all the way to his heel (as some thought) but ended at Ahab's heart.

That pull of cloud—tapered and blunt at one end and frayed at the other—seems the cottony representation of his ivory leg. But I will not see him all dismembered and scattered in heaven's blue—that would be no kind, reconstructive vision; no, intact, lofty and sailing, though his shape is changeable. Yesterday, when I tilted my face to the sky, I imaged not the full figure but only his cloudy head, a portrait, glancing back at me over his shoulder.

What weather is in Ahab's face?"

High in the air Webster watches the unbroken desert flow past, a deep copper red in the dawn, the sand ridged like waves rolling down toward the south.  Next to him Inessa lies curled up, sleeping through the jolts of turbulence and the drunken songs of the Russian engineers across the aisle.

Below, the sand gives way to grass on the vast Kazakh plain and in the distance, if he presses his face to the window, he can see the Altai mountains rising and stretching east into China.  He glances across at Inessa; she's small enough to be comfortable in her rigid seat, her knees pulled up against her chest like a child.  It's rare to see her be still, rare for her to be silent."