Welcome to Elle Newmark, author of The Sandalwood Tree as well as The Book of Unholy Mischief and The Chef's Apprentice. 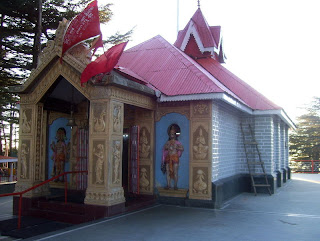 Jakhu Temple
While in India, researching The Sandalwood Tree, I visited Jakhu Temple, dedicated to the monkey god, Hanuman. Jakhu Temple sits at the highest point in Shimla, almost 9,000 feet, and on a clear day in March we left the car at the base of a slate stairway that stretched that disappeared in the clouds. I grabbed a bamboo walking stick and started up, determined to make it all the way no matter how long it took.
Halfway up, I stopped to catch my breath and something big and heavy hit me in the head and almost knocked me over. I didn’t know what happened until I saw a monkey sitting a few steps away holding the sunglasses that I’d been wearing a moment before. He just sat there, looking smug, and I was ready to kiss my glasses goodbye when a bored looking caretaker threw the little thug a pre-packaged monkey treat. The cunning thief grabbed his treat, dropped my glasses, and ran.
Blackmail!
Turns out, Jakhu Temple is overrun by monkeys who make their living by terrorizing tourists, but no one seems to mind.  The bamboo poles were not walking sticks at all; they were handed out to beat off the monkeys. It was, after all, Hanuman’s temple and if these were his acolytes who would dare get rid of them.
At the top of the stairs, we came to the small but elaborate temple where I took off my sandals, rinsed my feet under a cold tap and walked back a couple thousand years. As you walk into Jakhu Temple, you ring a bell suspended by garlands of flowers and enter a small, dim, smoky room. I thought the bell must be a solemn ritual until I saw a little boy jump up to whack it as hard as he could and laugh like a little maniac. Apparently, it’s just a casual head’s-up for the gods.
Just inside the door, I stepped over a turbaned man who was lying prostrate on the floor and holding a stick of incense in his outstretched hands. The eminently bribable gods sat in a regal enclosure in the middle of the room surrounded by flowers and offerings, while people circumnavigated the room in pious procession, praying and touching their foreheads to the wall. The statues, the bells, the incense, the hushed piety, the people lost in supplication, all of it made me think of the Catholic churches I grew up with. Except for the bare feet and the monkeys, it was pretty much the same.
Huh. Who’d have thought it?
************************************************************************************************
Thank you, Elle for sharing some of your travel experiences.   Elle is an award winning writer whose  books are inspired by her travels.  She and her husband, a retired physician, live in the hills north of San Diego.  To learn more about Elle, visit her website at www.ellenewmark.com
at May 04, 2011