The Sandalwood Tree by Elle Newmark 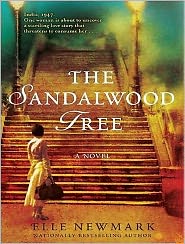 The Sandalwood Tree
by
Elle Newmark

Front flap:  "In 1947, an American anthropologist named Martin Mitchell wins a Fulbright Fellowship to study in India.  He travels there with his wife, Evie, and his son, determined to start a new chapter in their lives.  Upon the family's arrival thought, they are forced to stay in a small village due to violence surrounding Britain's imminent departure from India.  It is here, hidden behind a brick wall in their colonial bungalow, that Evie discovers a packet of old letters that tell a strange and compelling story of love and war involving two young English women who lived in the very same house in 1857.   Drawn to their story, Evie embarks on a mission to uncover what the letters didn't explain.  Her search leads her through the bazaars and temples of India as well as the dying society of the British Raj.  Along the way, a dark secret is exposed, and this new and disturbing knowledge creates a wedge between Evie and her husband."

The Sandalwood Tree is an excellent historical fiction story which takes place in two time periods - the 1840's and 1947 in India.   Two different time periods, one setting.   The history of the1857 Sepoy rebellion blending with 1947 end of British Rule with the partitioning of the Hindu's and Muslims is quite educational.The story of two young English women, set on being independent during a time period when it was frowned upon, is told through Evie's discovery of their letters and flashbacks. In both time frames, the racial divide between the cultures and well as the social divide is remarkable.  Elle Newmark has done a fantastic job of writing a story about love and war that is quite intriguing, gives you a broad perspective of life during those times and keeps you enthralled as you read, wanting to know what is going to happen next.
I'm a new fan of Elle Newmark and can't wait to read her other stories:  The Book of Unholy Mischief and The Chef's Apprentice. Her attention to detail is due to the fact she has traveled to the places of her stories and immerses herself in the culture.   She has graciously written an essay about her travels in India for the readers of My Two Blessings which I will share with you tomorrow.
Thank you to Grace for asking if I would be interesting in reading "The Sandalwood Tree" and providing me with a courtesy copy of the book.  Thank you to Elle for writing such warm, interesting characters and sharing their story.  I thoroughly enjoyed reading the book and highly recommend it.
Pages:  368
Publisher: Atria
Released:  April 5, 2011
Other Thoughts:
S. Krishna Books
"The characters are endearing and really capture the reader’s imagination, and their stories really serve to move the narrative along and inspire Evie’s imagination"
BookNAround
"The place is beautifully rendered in this novel. India and her overwhelming color and lushness stand out even as Newmark has captured the insularity, racism, and surprising compassion of the late 1940's British ex-pat community there."
Daisy's Book Journal
"Newmark transports the reader to India with her lush details of the area and descriptions of the people and the culture."
FYI:  I was not compensated for this review and opinions expressed herein are solely my own.
at May 03, 2011