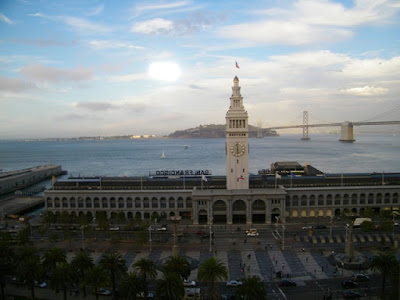 View from the window at the end of the hallway from the 11th floor
After a completely filling breakfast down in the Eclipse restaurant where they served cowboy proportions of delicious food, headed over to Grand Ballroom Foyer.   I had volunteered to work for two hours in the Registration area.   Turned into more of an information, pointing out where to go person than registration, since most folks had registered by Saturday. However they did end having over 100 walk-in's come in for day passes.  According to Karen, a most wonderful hard working volunteer, there were over 1400 people pre-signed for the conference, 200 walk-in's on Friday and 100 on Saturday.  Lots of people.  Had a blast helping folks out, and if I ever do another conference will volunteer more time.
Walked down to the Port of San Francisco with Laura of I'm Booking It where we feasted on taco's from Mijita Cocina Mexicana and then wandering through Ferry Building Marketplace and explored Book Passages and picked up some delicious chocolate from Scharffen Berger.
Headed back to the conference to the Grand Ballroom where Jacqueline Winspear interviewed Guest of Honor Lee Child.   Among many things, Child talked about his research and writing process. He mentioned how folks thought the ending of 61 hours was a cliff hanger and it really wasn't. He assumed people would be able to use their imagination and figure it out without him having to spell everything out. The answers are all right there in the book.  When he decided to write The Killing Floor and have the setting in Georgia, he didn't have the money to go to Georgia, so what did he do. He watched My Cousin Vinny, which even though it was set in Alabama was close enough. He said it didn't matter whether he actually went to the locations his books were set in, because he received complaints that he hadn't gotten it right.

After listening to Lee Child, went on to sit in on a Continuous Conversation about the Business of Books with a large group of panelists including Seth Harwood, Elizabeth Sims, John Goodwin to name a few.  Then moved on to a 30 on the 30 which was a 30 minute presentation by Dennis Palumbo on How to address writers' block, procrastination and other perils.

I could have listened to Dennis for a couple hours.  He was a screenwriter for the first two seasons of Welcome Back Kotter back in the 70's and is now a licensed psychotherapist for screenwriters, authors, directors, etc.   His viewpoints on writers block made a lot of sense.  In a nutshell:

Writer's block is an inevitable developmental process for writers.  A block general happens before a big growth spurt. It is that tension between stages.  Once you have gotten past the block, you have grown as a writer.  Are you a worse writer after that. No, you are a better writer.   Whatever is blocking you, write about it. If it is fear or worry, then write about your character fearing or worrying about something.  If you feel like you are drowning, then write about the character drowning, figuratively or literally.  Don't give writers block a negative meaning.  It only means something if you let it.   Dennis has three cosmic rules of writing.

1st cosmic rule:  "You are enough."   Quit with the if only's.   Everybody thinks the party is happening somewhere else.     You have everything in you to be the writer you want to be right now.

2nd cosmic rule:  "Work with what you are given."  Use who you are, your personal voice, your experiences and emotions.


3rd cosmic rule:  "Writing begets writing."   Quit thinking and worrying about it, do it, write.  If you get to your computer and along the way, stumble over the cat in the morning, and then sit there and can't think about what to write.  Start with the cat.

He gave us all quite a bit to think about.  I'm looking forward to reading his book:  Writing from the Inside Out: Transforming Your Psychological Blocks to Release the Writer Within.

From there, I headed over to the Grand Ballroom for a reading of a play by Irish playwright and mystery author Declan Hughes called I Can't Get Started with an amazing all star author cast of Megan Abbott, Brett Battles, Mark Billingham, Christa Faust, Alison Gaylin, Martyn Waites and Declan Hughes.  Highlights of the play to be continued in the next post.