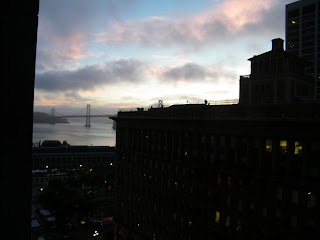 I was awakened by room service delivering my breakfast which is better than a wake up call any day. The first night, Hyatt had a neat door hanger thing you could circle what you wanted for breakfast and what time you wanted it delivered, hang it outside your door before midnight and wallah, breakfast delivered.  Plus, when I looked out the window  I was treated to this beautiful sight.  What a way to start the day.

My first panel of the day with one of my favorite authors - Michelle Gagnon. I've been wanting to know what happened to Kelly ever since I read her last book "Gatekeeper."  Her newest book "Kidnap and Ransom" answers that which is coming out November 1st.   But guess what, I got a copy. Yeah!  The panel Runaway discussed the use of horror and violence as plot points with authors April Smith moderating and Michael Ayoob, Jonathan Woods, Michelle and Shane Gericke.  I unfortunately forgot my pen so don't remember a whole lot of things they said. It's all a blur except yep you guessed it. More authors to add to my want list. 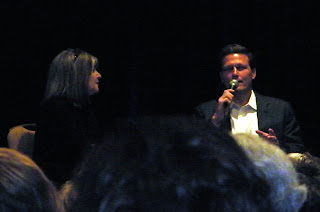 Next stop - an unscripted conversation between Hank Phillipi Ryan and David Baldacci.  David's newest book "Hell's Corner" will be out November 9th.  Interestedly enough he said he doesn't know the ending of any of his books when he starts them.  Writing for him is a totally spontaneous, creative process.  His best advice - "If action doesn't help the characters or the enhance the plot, leave it out."  And Scholastic has asked him to write the very last book in the 39 Clues series.  When he asked them what made them think he could write a young adult novel, they said they were impressed by his character Willa in First Family.

From there, I sat in on the Interlude Panel talking about a story is more than just action with authors Chris Knopf moderating, Robert Gregory Browne (one of my favorite murderati blog authors), Michael Dymmoch, Bill Crider and Todd Ritter.  These guys were quite humorous, played off each other quite well and Bill Crider has a delightful Texas accent which reminded me of when I used to live in Texas.   Lots of talk about intuitive writing, emotional action, and the quiet times in the book between moments of action and how to handle it.  Bill Crider's favorite - have your character play with their dog.  This seemed to come up quite a bit in panels. Animals are favorites.

After lunch and taking a short nap, went to Mulholland Books (the new imprint of Little, Brown and Company)  Murder By Proxy presentation introducing marketing director,  Miriam Parker (just as bubbly and nice in person as she is on the blogosphere including squeals and hugs on both our parts when we met) and editor John Schoenfelder.

Miriam Parker and John Schoenfelder
They introduced the authors who will be writing for Mulholland books including Mark Billingham, Marcia Clark,  Duane Swierczynski,  Daniel Woodrell, and Sebastian Rotella 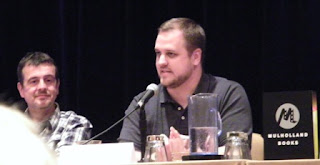 Mark Billingham and Duane Swiercynski Both men are just hoots and I'm looking forward to reading and reviewing their books. 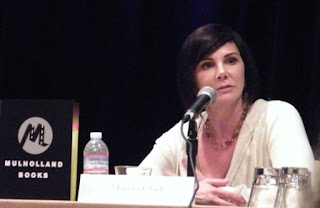 Marcia Clark.  Yes, the prosecutor from the infamous O.J. Trial.   Her debut crime thriller novel "Guilt by Association" will be out in 2011.
Then I was the unofficial water girl, official bearer of name badges for the Crossfire Panel about putting your protagonist in jeopardy.

The panel included professor Randal Brandt moderating for authors Lori Armstrong (squee), James Rollins (double squee) and Dianne Emley, Karen Olsen and James L. Thane.  I've read most of their books except for Dianne and headed right down to the bookstore to buy "The First Cut." 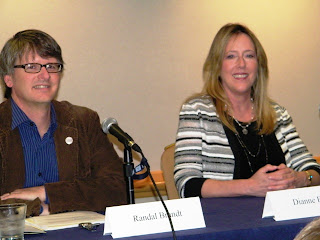 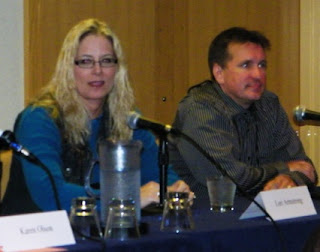 Lori Armstrong And James Rollins
I lurved Lori's Julie Collins Mysteries and she now has a new series, the Mercy Gunderson Mysteries with the first book out "No Mercy."   Can't wait to read it.  They talked about the cost to characters for escaping jeopardy whether it is physical or emotional.  James Rollins also talked about the sympathy builders. He has a list of 7 things - he shared two but then made available the link to his website with the list.

After all those panels, I was pretty much wiped out for the day.   Had dinner and retired to my room and watched a movie, Knight and Day, then passed out.
at October 19, 2010