The Killing of Mindi Quintana by Jeffrey Cohen 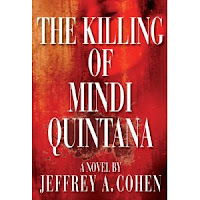 The Killing of Mindi Quintana
by

Back cover:  "Freddy Builder is certain he is meant for more.  More than his life in corporate America bondage.  More than selling china to bluebloods in Philadelphia's landmark department store, Chanet's.  Meant for more, meant for better, and lacking only, only an occasion to rise to.
And now that occasion is murder--of Mindi Quintana, an old college flame wanting simply to stay in his past.  Freddy's crime is major news from the start.  Mindi is the beautiful daughter of a renowned Philadelphia businessman whose dramatic fall a few years back captivated the city.  A televised trial for Freddy is in the offing.  Meanwhile, he is writing the book about his relationship with Mindi--a remorseless rewrite of her life, his own, and their miserably thin involvement.
As excerpts of his book are published to acclaim, he gives articulate, sympathetic jailhouse interviews, publishes ghostwritten articles on prison issues, and coverage goes national.  A new celebrity murderer is taking the stage--a killer with a book, a jailhouse literary sensation.
Freddy's defense attorney, Phillip, watches in disgust as his client builds his fame with the bones of his victim.  As a career public defender, Phillip thought he'd seen evil in all its incarnations.  He'd lost his outrage, his passion for the law, and his marriage along the way.  But as Freddy's case is a turning point for him--the public's sympathy for the poet murderer, the rebel, the killer as a greater soul--stirs something dormant in Philip.   To stop Freddy, and to vindicate Mindi, Phillip will have to violate his oath, even break the law.  But with the help of Mindi's best friend Lisa, he gives Mindi back the truth of her life and death.  And he'll deliver a comeuppance to a killer with a book."

"The Killing of Mindi Quintana" is the debut novel by attorney Jeffrey Cohen.   Mindi runs into Freddy by chance when she goes into Chanet's to buy a present for her parents.  She works for Getting Feather's fashion magazine and Freddy wants to renew their past friendship so he uses his writing as a way to spend time with Mindi.  Only his writing isn't really that good and Mindi tries to give him constructive criticism. One evening they get together for drinks and Mindi realizes he's not what he seems.  She rejects his advance and he lashes out and ends up killing her.  While in prison, a reporter makes a deal with him and helps him gain notoriety through writing his story of his relationship with Mindi.

I thoroughly disliked Freddy from the very beginning.   He's one of those characters that just disgust you and make you want to not read the book.  All the characters in the book were flawed in some shape or form and Cohen's satirical portrayal of corporate America was rather depressing.  Cohen's writing style was unique and even had one complete chapter in which the character's were referred to as he and she through out.


"I didn't think you'd want to talk to me." is the first thing he says when they find a table and order drinks.

"I just thought--because she was your best friend."

It is she who suggested Murphy's when he asked her to meet.  She explained Mindi liked it.  He wonders if she wants him to fell guilty.  He wonders if it is smart to be here at all.

"I didn't think you would ask me questions like that."


"Things about them together, I guess.  To see what kind of case you have."  She's drinking her Tanqueray and tonic and there's a Seagram's in front of him.  He hasn't noticed the waitress put them them down. There is something alive in his stomach.  It is wearing ice skates and cutting him open.  I need to know what she was like."  He's trying to smile but should probably give up.


He thinks she's going to cry.  "Tell me about her!  I have decisions to make!" He couldn't have yelled at her, maybe he hasn't.  But a few heads have turned.  He' stirring his drink and taking one of her cigarettes.  He doesn't smoke but there's not time like the present.  He's sure he is a lunatic.  (pg211)


The premise of the story is interesting, but I really didn't like the ending.  However, there are some who think the ending was ingenious, so you'll have to decide for yourself.

"The Killing of Mindi Quintana" was provided to me free by TLC tours and the publisher as part of the book tour.  The review is based on my personal opinion of the story and I was not compensated for my review.   Check out the other tour stops at TLC Book tours.