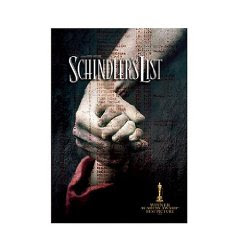 I know the movie came out back in the 90's but I never saw it. Don't know why - just didn't. The other night I was reading and Father calls from living room "Schindler's List is starting." I look at the clock - 10:30 p.m. I really don't want to start watching a movie so late and tell him to dvr it. After a few minutes I go into the living room, sit down and it only took a matter of minutes for the movie to capture me. Yes, I ended up staying up til 1:30 a.m. watching the whole movie. Needless to say, we were both reduced to tears by the ending.

The movie brought back memories of going to the movie theater with my sister back in the 1970's to see Corrie Ten Boom's The Hiding Place. I had read the book so knew what to expect, but still. When the movie was over, I don't think there was a dry eye in the place. You know how when you come out of movie, everyone is usually chattering about the movie. How great it was, what their favorite part was, things like that... Not a sound from anyone. Just sniffles as we all quietly walked out of the theater, teary eyed and emotionally drained.

Returning back to Schindler's list - it is an excellent movie about the atrocities of the Holocaust. Filmed in black and white, there are a few minor moments of color. When the soldiers are moving through the town, shooting everyone. A little girl in a red coat, wandering the streets, seemingly in an aimless fashion, walking home to hide under her bed. Later in the movie, she is seen dead being hauled on a cart somewhere. Really gets to you. Well, the whole movie gets to you. The actors did a superb job: Liam Neeson as Schindler, Ralph Fiennes as the sadistic camp commandant, Ben Kingleys as schindler's jewish accountant, Istak Stern. I got a lump in my throat at the ending when each actor escorted the actual person they had portrayed up to Schindler's grave to place a rock on his headstone.