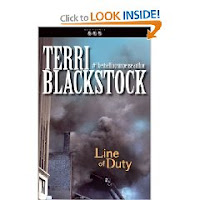 Back cover: "Attorny Jill Nichols was on the top floor, taking a deposition from CEO Donald Merritt for a case of corporate stock fraud. Directly below them on the 29th floor, Merritt's assistant was about to discover the explosive device in time to alert the building - but not to empty it. The massive blast turns the upper stories of the New Orlean's high rise into an inferno. A five-alarm call goes out to fire houses in surrounding towns, and now Newpointe's firefighters are on the scene. Knowing Jill may be trapped inside, fireman Dan Nichols is frantic. But his fears for his wife are eclipsed by two more explosions. In a terrifying echo of 9/11, the firefighters become the victims. As loved ones from Newpointe wait for news from the rescue site, they sort through the rubble of thier own lives, struggling with the riddle of God's grace in the midst of shattering losses. Meanwhile, mounting evidence suggests that the attack may have come from within...and a grieving rage-ridden young teenager may hold the secret that can bring a mass murderer to justice."

Line of Duty with shades of 9/11 is a well written, but emotional read. The crew from Newpointe are trapped inside the building when it falls and everyone is tested as they attempt to rescue not only the occupants of the building, but the firefighters as well. How will the survivors cope, how will their relationships be tested and how will their faith in God help them. It's difficult to say anything without giving away any spoilers. So I won't. Highly recommended.