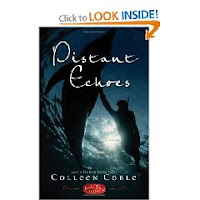 Back Cover: "When a missile plows into a tourist boat, dolphin researcher Kaia Oana is one of the first into the water, risking her own life to help others. When called upon to investigate the incident, Lieutenant Commander Jesse Matthews enlists Kaia and her specially trained dolphins to help--and romantic sparks fly. As Kaia and Jesse edge closer to the truth about the accident, their own lives are threatened. Will they be able to stop a killer before more lives are lost?"

Overall, the story is good, but the characters seem two dimensional. The main character seemed very childish and immature and she is supposed to be 29, which made it difficult to get into the story. There were a couple times I was throw out of the story, because the scene didn't make sense. For instance: she drove out to her brother's house and sees him having an intense conversation with a navy officer, possibly his commander. She decides to wait in her truck and not interfere. While she is waiting, she falls asleep. She wakes up an hour and a half later. Then she goes to find her brother and overhears him having a conversation with two different rough looking men and it seems he is involved in something shady. So she leaves. (pg 145-149). I'm paraphrasing of course. But there isn't any indication that her brother had seen or heard her drive up or any of the other men had seen her sitting out front in the truck or knew of her presence. The next time she drives to her brother's house, he hears her immediately and comes out to talk to her. Just didn't make sense to me. The story seemed to improve after the first half of the book and pulled me in. Since I have the next two books in the series: Black Sands and Dangerous Depth, I'm hoping they will be an improvement upon Distant Echoes.
at January 21, 2009