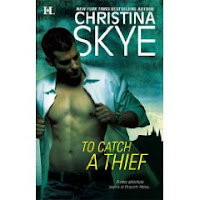 To Catch A Thief


Back Cover: "Nell MacInnes can spot a forgery from a mile away. After all, she learned from the best-- her father is one of the art world's most notorious thieves. His brutal beating by the very authorities who claim to keep the world safe from harm taught her one more valuable lesson--trust no one. The last thing rugged Navy Seal Dakota Smith needs on his mission is a tempting woman he doesn't trust. But a sketch by Leonard da Vince has gone missing, and the art conservator's skill in detecting forgery would be invaluable, if only her ties to the criminal world are as dead as she says they are. Soon an edge partnership and white hot attraction are forged between Nell and Dakota as they race to Draycott Abbey to track down a ruthless criminal with terrorist ties before time runs out--and the da Vinci is lost forever."

First time read by author Christina Skye. The story was well done and fast paced. The characters end up spending more time apart, than together. The romance part of the story was secondary to the action of resolving the mystery of the stolen da vinci. Which actually worked out quite well, because Dakota didn't trust Nell to begin with and didn't know how involved she was or if her father was involved.

I thoroughly enjoyed the writing and will probably read more stories by Christina Skye. She has a paranormal romance series with books interestingly named: Code Name: Bikini, Code Name: Blondie and Code Name: Baby to name a few. They will be going on my wishlist for a later time.