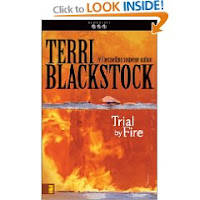 Front Flap Excerpt: "Pastor and fireman Nick Foster found the body in the inferno engulfing his church. From the bullet wound in the head, it's clear this is no ordinary fire victim. The quiet community of Newpointe, reeling from the shock of the dead man's identity, struggles with the agonizing question, who did it--and why? Paramedic Issie Mattreaux is no icon of virtue, but she cares enough about her teenage nephew, Jake, to track him down when he turns up missing. Only, what she finds is far more than a harmless bonfire on the outskirts of town.
After a chilling attempt on Issie's life, Nick takes on the role of protector even as he struggles with the tragedy that has struck his church. Whoever is behind the fire is far from finished. Unknown to Nick, that person's twisted agenda now threatens to consume everything he loves most."

In Trial by Fire the KKK has come to town. Cruz, the grandson of the retired grand wizard of the KKK is influencing teenagers to the bad side and sets out to cause trouble in the town of Newpointe. Nick's church is burned to the ground and the body of a young black man found dead inside from a gunshot wound to the head. Issie's nephew Jake is involved and puts Issie's life in danger when she tries to intervene. Nick is disheartened by the loss of his church, the death of his dear friend's son and his lack of faith in accepting God's will. While he tries to overcome his physical pain from burns received in the fire, he wrestles with his lack of faith and if he should leave the ministry. Mixed in with all the trouble is his attraction to Issie who is a non believer. Issie also has to deal with the lack of trust by the townspeople as she tries to save Jake and prevent another murder. Will Nick continue to be a minister; will Issie stop Cruz and his supporters; will Issie finally accept the Lord; and finally what will happen between Nick and Issie. These questions and more are answered in this very suspenseful, heart rendering story of death, loss and faith.
at October 19, 2008