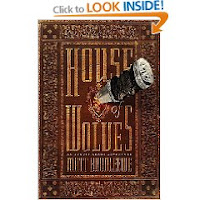 
Front Flap Excerpt: "Yesterday was August Adam's birthday. It didn't go well. Today is worse. He's being chased, slashed, lied to, knocked out, shot at...and tied up with his ex-wife and young son in the freezing belly of a plane on the way to the bottom of the world. All because of a very rare book with a secret, a nazi plan that's been in deep freeze for half a century, and an ancient, power-hungry underground organization with eyes on a holy--and possibly deadly--prize. The implications are both global and intensely personal. Because unless August Adams figures it all out soon, no one near him will live to see tomorrow."

August's dad sends him a rare birthday present - a book called The Gospels of Henry the Lion. Is it a copy or the original? It doesn't matter to the secret society, The Black Vehms. They want the book no matter what. The body count rises as August and his family are chased from the streets of New York to the unbearable cold of Antarctica. August must solve the riddle of the book in order to save his life and the life of his family. What secrets will be revealed?

August Adam's adventure began in The Illuminated and continues in House of Wolves. A third novel, The Deadly hours will be out in August 2009.
at October 19, 2008