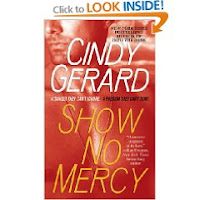 Rating: ***** Excellent
Back Cover Excerpt: Only two things can compel Journalist Jenna McMillan back to Buenes Aires after terrorists held her captive there just months before: a rare interview with a shadowy billionaire and the memory of the dark and dangerous man who saved her... Bad guys, bombs and bullets are Gabriel Jones's way of life. But he'll never forget the brash redhead he rescued not so long ago.. or the passionate kiss they shared before he sent her packing. Now forced together by a bombing at the National congress, Jenna and Gabe confront the urgent longings that simmer between them. But this surprise meeting is no coincidence. A ruthless enemy stalks them with deadly precision. The question is... if they make it out alive, will Gabe turn his back on Jenna ... again?

Show No Mercy is the first in a new romantic suspense series with lots of suspense, drama and action as well as passion. If you read any of her Bodyguard Series, this new Black Ops series is along the same caliber. Gabe and Jenna were introduced in Into The Dark (Bodyguards # 6). The story is well done with the just the right balance of action and romance. I don't want to give any of the story away, so go read it for yourself. I highly recommend it.
at October 27, 2008