Book Review - All The Queens Men 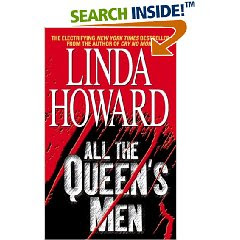 Back Flap: "John Medina, The CIA’s legendary Black Ops specialist, works in the shadows of the government’s deadliest missions. And no one knows the dangers of getting close to him better than does communications expert Niema Burdock. Five years ago, Niema and her husband, Dallas, worked with Medina on an explosive mission that trapped Dallas in the cross-fire—Fatally. Although she has slowly healed from her terrible loss, Niema never planned to see Medina again. But now John Medina needs her…
A French arms dealer is supplying international terrorist units, and only Niema can plant the undetectable bugs needed to crack the deadly. Against her better instincts, Niema infiltrates the dealer’s glamourous world by going undercover. But when their careful strategy begins to crack, Niema and John take flight in a strange land—and find their partnership sparking with an erotically charged electricity. In a world of deception, John Medina has once again set Niema on a free fall into danger and desire."

John Medina was first introduced in “Kill and Tell” and Howard tells his story in “All the Queen’s Men.” He has a very powerful personality, but Niema manages to hold her own with him. Without giving away an spoilers, the action and the love scenes are quite intense. Howard manages to put you into the mind of her characters and pulls you into the story. I have read most of Linda Howard’s books and thoroughly enjoyed all of them.