Family Life: What a week!

Monday, after James finished his swimming lesson, his aunts KH and KL, along with my darling nephew L were here for a visit. KH and L were in town from Texas to go camping with KL and her family. They were able to come up for the afternoon and spend some time with us. L just turned 12 in June and I gave him Dragonopoly Game for his Birthday. (I can never forget his birthday, because I was his mom’s birth coach. What an experience that was!!!!!) Sometime I may be late with gifts, however, and I was forgiven.

We had fun talking, while playing with the GeoSafari xcavations, building lego houses, and whatnot. James received an early birthday present from Aunt KL – Dora the Explorer – summer explorer. He enjoyed watching it!

Wednesday, I took James to Bounce Town after swimming lessons and lunch. Bounce town has indoor inflatable bounce houses for kids to play in and on. They have "the Big Slide, Ironman Challenge, Ten in one playground and the Three in one Jumper". Tuesday and Wednesday, it is open for public play. Well, James wanted me to go on everything with him, including the Iron Man Challenge. We were climbing and bouncing and crawling and jumping.

The ironman was another story all together. We climbed through the hole at the start of the challenge 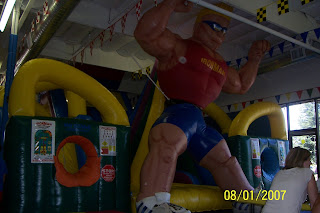 At the beginning, you have to climb a 5 foot rock wall, drop into a pit and then squeeze between the top of an obstacle wall and a round barrel. I think there was a foot of clearance to squeeze through

Well, after we drop into the pit, James is quite sure that he can not squeeze through. I decided to show him how and squeezed through myself. My ever so cautious son still isn't convinced he can do it and starts getting mad because I have now left him behind. I tried to squeeze back through the other way, but couldn't get a foothold. James is convinced I am going to try and pull him through, so won't grab my hands to help pull me back through.

A variety of kids come crashing through and around us. A very nice young man drops into the pit, and sits there a minute watching the drama between James and I. He nicely grabs my hands, when asked and I pull myself back through. Of course, my 40 something body isn't used to such shenanigans and pulled a muscle in my neck in the process. Oy!!!!!

Another parent pops her head up over the rock wall to check out whether she wants to go through with her kids, however once she sees me sitting there rubbing my neck, she changes her mind. I grab James and push over the netting to the bottom of the slide and we crawled off the iron man.

After a while, James went on the big slide by himself , scaling the rock wall and sliding down the steep slide. 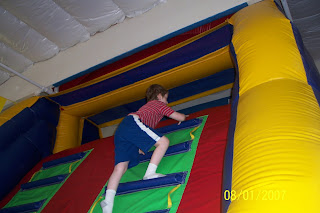 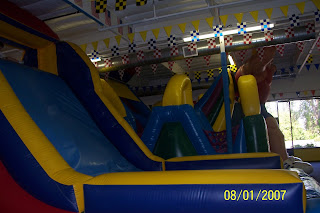 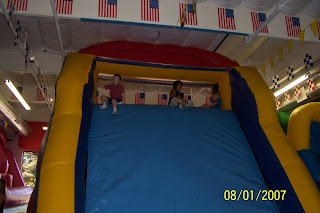 Later on the drive home, James wants to turn around and go back and retry the iron man. He is ready to do the squeeze play. As Joey from Friends used to say "forget about it".

My whole body was sore. I iced my neck, took lots of Tylenol and we relaxed for the rest of the day.

And to add insult to injury, Thursday I had a mammogram done. Nothing like having your "booKs" tightly squeezed and compressed between two panels. I think I'll go back and retry the iron man challenge again. It's less painful.
at August 03, 2007